Makerere University Appointments Board has Monday with immediate effect lifted the suspension of the remaining two leaders of the administrative staff Association who were dismissed last year.

They had been suspended by the Vice Chancellor, Prof Barnabas Nawangwe.

Bennet Magara and Kalema Joseph Chairman and General Secretary of the Administrative staff respectively, were among the over 40 staff members suspended by the university last year, over various reasons including including misconduct and absconding from duty.

There suspension was preceded by that of the Makerere University Academic Staff Association (MUASA), Deus Kamunyu, on January 17, by the Vice Chancellor on allegations of misconduct and insubordination.

The trio (Magara, Kamunyu and Kalema) on March 13 appeared before the Appointments Board chaired by Jolly Uzamukunda, for the preliminary hearing of their disciplinary cases, only for Kamunyu’s suspension to be lifted. This prompted Magara and Kalema to apply for temporary relief as well.

In a response to them, Director Human Resources of the University, Andrew Abunyang wrote: “You will receive the board’s decision on the aforesaid hearing date of 25th March, 2019.”

On Monday, the Board without any conditions attached, lifted their suspension.

The matter has been adjourned to April 12 to enable the prosecution led by Esther Kabinga and Naomi Kiconco Ochieng of the Directorate of Legal Affairs to avail the accused staff with all the relevant witness statements and other documents to be relied on by the University in presenting its case.

Commenting on the matter, the lawyer to the accused, Isaac Ssemakadde applauded the Board for working towards fixing problems as the University.

“This is a positive signal that the new Appointments Board is determined to turn over a new leaf after years of impunity, unfairness, and bad human resource practices exhibited by her predecessors,” he said.

He added: “We’ll continue to cooperate with them (board) to improve transparency and accountability in the employment systems of Makerere University.”

It should be recalled that lifting of the suspensions of Kalema, Kamunyu and Magara was top on the demands by the staff when they went on a month-long strike in January.

Striking members of staff accused the Vice Chancellor of unlawfully suspending the MUASA leader as well as two other leaders of the Administrative Association.

Thestaff argued that the actions Kamunyu and the other two were accused of involving in were done in their capacity as representatives of the staff and that according to the laws, the Vice Chancellor had no powers to penalize them. 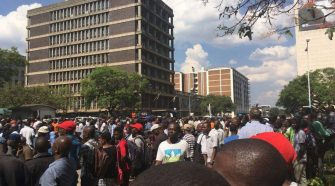