Parliament has summoned the Ministers of Internal Affairs, Defence and Security to appear to explain the alleged brutal attack on students of Makerere University who are on strike protesting the university’s 15 percent tuition increment policy.

This was after Members of Parliament decided to defer the debate on the statement by the Minister of State for Higher Education, John Muyingo on the student’s unrest at the University.

The legislators’ call came after members noted that the Minister’s statement had been called for debate late at a time when most MPs had already left the House.

The Speaker thus agreed to defer the debate to Thursday, ruling however that the other concerned Ministers of Security, Defence and Internal Affairs avail themselves to the House to make statements.

However, the law makers noted that the security of students at the university and those who had petitioned Parliament was at stake and would not just adjourn the House without ensuring their security and condemning the acts against students by security agencies.

Mityana Municipality MP, Francis Zaake told Parliament that a number of students have been arrested and others kidnapped including the Guild President, Julius Kateregga who went missing after appearing on a Television show on Wednesday morning.

“As of now, the Guild President has been kidnapped and we don’t know his situation because we have seen a number of people released after being tortured. Over 26 students have also been suspended and something needs to be done urgently,” Zaake noted.

On Wednesday, Makerere University suspended 9 students while 26 other students were issued a warning, for their alleged in destroying university property as well as property of businesses operating in the neighborhood.

Butambala county MP, Muwanga Kivumbi demanded that the Speaker directs security agencies to withdraw their personal from students hostels which are private property and outside the university from where students are being attacked.

The legislators passed a resolution condemning the brutal attack on the students and demanded that the Minister guarantees the security of all students.

Commenting on the security status of students, Minister Muyingo noted that he is equally concerned and in pain over the brutality meted on the students. He promised to do everything possible to ensure that the students are safe.

“Whatever happens to students affects me as well. I want to say that I am concerned about the safety of our students. I will do whatever is possible to make sure that our students are secure wherever they are,” Muyingo said.

The Speaker has promised that the House will Thursday give the first two hours of plenary session to debate the statement on the unrest at the university conclusively. 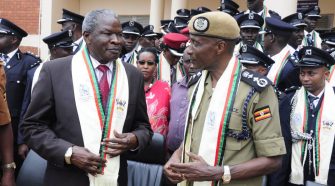 “Police is Judged Unfairly, Our Mistakes are Magnified” – Kayihura