Students of Makerere University have given the striking lecturers and Management an ultimatum of 48 hours to resolve their differences and allow for normal classes to commence, failure of which they (students) will go on strike.

The decision was reached on Wednesday during a sitting of the Students’ Guild Council chaired by the Guild Speaker, Isaac Kwagala. The meeting was also attended by the Guild President, Papa Were Salim.

The student leaders outlined a number of demands to the University Management which include the reinstatement of the suspended MUASA Chairman, Dr Deus Kamunyu Muhwezi. The Chairman of the academic staff was suspended last week by the Vice Chancellor, Prof Barnabas Nawangwe, sparking a strike by the lecturers who now demand that his suspension be lifted.

Magara and Kalema were among the over 40 members of staff that were recently dismissed by the University for a range of reasons including absonding from duty.

The students said “we believe this is the only way to restore sanity and curb the fire from wildly spreading on the hill”.

Kwagala said there can not be a meaningful and permanent resolution to the current crisis without the immediate reinstatement of the suspended leaders of Associations.

Student leaders are also demanding that the Management rescinds “draconian laws” that they say usurp the powers of students in the election of student representatives. They want the Guild Elections Regulations of 2018 to be degazetted with immediate effect.

The Guild Council also resolved that the University Management immediately and unconditionally reverses the suspension of Obedgui Derrick and Ndamwesiga Ian who were suspended “illegally” for challenging last year’s tuition policy.

They further demand that the Management accounts for the Shs 8.9bn generated from tuition increment in the previous semester, as a way of ensuring transparency.

“In the bid to show transparency in the university’s structure, the House in its capacity as a party to the tuition policy, seeks for the accountability of the Shs 8,900,000,000 collected last semester from this very [tuition] policy and this should be done in a fortnight’s time,” the communique read.

It should be recalled that in July 2018, Makerere University Council approved a 15 percent tuition increment which took effect in August of 2018 as the new students enrolled to the university.

The passing of the increment followed persistent strikes by students in protest of earlier proposals by Council for a 45 percent and 91 percent hike in tuition fees.

The Guild Council has also condemned what they call the continued harassment of students by the security personnel deployed within the campus. The leaders demanded that the armed personnel (Police and UPDF) be withdrawn from the university premises since it is not a war zone.

“We have out of civility and good faith given the University Council and Management a 48 hour ultimatum to meet our demands or face mass action from the students in way of a strike,” Speaker Kwagala wrote.

The ultimatum, according to Kwagala, takes effect Thursday January 23 at midnight.

The Guild President, Papa Were Salim said: “If the lectures haven’t resumed or the Guild Elections Regulations not repealed by Friday, we shall be left with no option but to declare industrial action”. 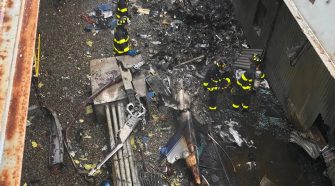