Associate Professor Charles Niwagaba has bounced back at Makerere University after spending over one and half year chasing for justice following his dismissal.

“The purpose of this letter is to inform you that you have been reinstating as an associate professor, salary scale m4 effective 1st January 2019,” his reinstatement letter reads in part.  Niwagaba is among the 45 employees that were dismissed from Makerere University during the 2018 Christmas holidays.

He was accused of failing to submit examination scripts and results of students for Course PIM8102 – Water Resources and Sanitation Management.  According to Niwagaba, he was wrongly dismissed since the student in question had graduated.

He however says the university system denied him a chance to prove his innocence leaving him one option of seeking redress from courts of law.

Niwagaba, who is an expert in Automotive, Environmental, and Chemical Engineering from the College of Engineering, Design, Art, and Technology – CEDAT, says that he was caught on the wrong side of the powers that be that almost cost him his job.

Formerly a fierce critic of the current university leadership, Niwagaba after reflecting on what transpired before his dismissal, he is returning to Makerere University as a humble man and will mind his business.

“I come back to Makerere a very humble man. To be sincere, there is no clear reason for my dismissal up-to-date. But the circumstances might have been plotted as one of the means to silence me- and many others. Now, I will just mind my own business,” he told this reporter during an interview at his private office on Mawanda road.

The frustrated engineer, who had grown through the ranks from Teaching Assistant, up to associate Professor, says was angered by the fact that after serving Makerere for over 20 years, he had been rewarded by ‘dishonorable discharge’.

He adds that he also felt a disgrace during the time of his dismissal more so when several students continued looking for him seeking for help.

Besides being disturbed by students, Niwagaba notes that he continued living his life and operations in the private sector to make ends meet. He reveals that even when he appealed, the university never paid him despite repeated pleas to management.

However, Niwagaba will soon be laughing his way to the bank to collect Shillings 115 million in salary arrears and emoluments in addition to the Shillings 50 million in court awards.

In recent years, several Makerere university workers have either been suspended or dismissed for being vocal or trying to check on the excess of the current administration.

In the last four months only, court has ordered for reinstatement of more than five staff including; Associate Professor Charles Niwagaba, Dr. Stella Nyanzi and deputy Academic Registrar Margaret Etuusa among others for illegal dismissal. 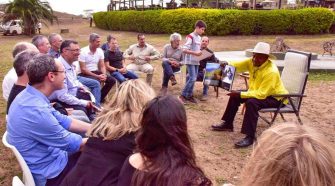 From Bwindi to Sipi Falls, Uganda is Breathtakingly Beautiful – Museveni