On TV, he had appeared alongside the University’s Head of Communications, Dr Muhammad Kiggundu.

“His phone was on when he was on NBS but after the show, it went off.e were told that he was kidnapped and we have since looked for him everywhere but we can’t find him,” Nalukwago told this news website

Kateregga was due to address a students’ General Assembly on Wednesday morning to discuss the resolutions from Tuesday’s engagement between student leaders and the University Council.

He reaffirmed the placed General Assembly while appearing on the TV show.

Nalukwago says students who gathered for the General Assembly resorted to a demonstration after realizing that the Guild President was nowhere to be found.

“People are striking because he called for the General Assembly and he was supposed to address it. Police is here dispersing the crowds by beating up students,” she explains.

The Council resolved to maintain the 15% increment in tuition fees which was effected in July 2018, saying revising the fees structure would have significant implications on the financial status of the university and the ability of the university to continue providing services.

The resolution to stay the increment was part of the outcomes of a meeting between student leaders and members of the University council held on Tuesday.

The students who have been striking since Tuesday last week say the fees hike which they say is unfair and costly to both current students and those who will join the university in the near future.

Passed and effected in 2018, the policy provides for a 15% increment on newly admitted students on the tuition of the previous intake and pay the same amount until completion of their courses. The increment will span over 5 years from the intake of 2018/2019.

“I have just watched him on NBS television, when did he disappear?” asked Onyango

He said the was to find on information regarding the same and get back to this reporter. 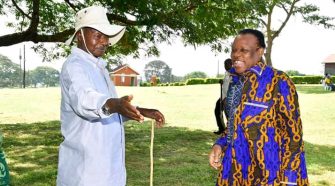