In the latest move by Prof Barnabas Nawangwe to crack the whip on indisciplined staff, Makerere University has suspended the Chairman of the academic staff (MUASA), Dr Deus Kamunyu Muhwezi for what he termed as continued misconduct and insurbodination.

The university says Muhwezi who is a lecturer in the Department of Forestry, Biodiversity and Tourism has persistently engaged in acts of misconduct and incitement with the intent to cause disobedience and strikes. January 17

Makerere Universiry Vice Chancellor, Prof Nawangwe wrote to Muhwezi on January 17 notifying him that he had been suspended.

“Despite various warnings, you have continued to engage in acts that amount to misconduct, including offences under the Computer Misuse Act, incitement with the intent to cause disobedience and/or strikes to undermine the university administration,” the Vice Chancellor said in his letter.

“Your aforesaid unlawful activities contravene the terms and conditions of your employment with the university and also violate provisions of the Employment Act, 2006, the Uganda Public Service Standing Orders 2010, and the Makerere University Human Resources Manual 2009, and other policies governing employment with Makerere Univeristy,” Nawangwe added in the letter to the MUASA Chairman .

The Vive Chancellor also cited security reports which he says have shown that Muhwezi continued to incite other staff to disrupt university activities and engage in related unlawful conduct.

“You have routinely been advised and engaged to stop your aforesaid misconduct but you have not taken heed”.

As such, Nawangwe has suspended Muhwezi with immediate effect. During his suspension, he will receive half his salary and will not be allowed to access University premises offices or property.

“In order to protect the reputation of the university, its activities, personnel and property from your disruptive activities, I hereby suspend you form the university in accordance with Section 5.9 (b) of the Makerere University Human Resources Manual”.

He said a committee will be constituted to investigate Dr Muhwezi’s said conduct and he will receive be invited to participate in the committee’s proceedings.

He has been asked to handover university property in his possession to his supervisor.

The suspension of the MUASA Chairman comes days after a meeting of Makerere condemned the recent dismissal by Management of over 30 members of staff. The meeting resolved to lay down their tools if the Management did not reconsider its “irregular” decision to dismiss the lecturers.

“I want to congratulate Prof Nawangwe and his team for being decisive in terms of disciplining lecturers here and staff. It is very embarrassing to see a so-called lecturer in court for raping a young girl and he’s still teaching. That’s rubbish,” Museveni said on Tuesday.

It remains to be seen how the academic staff will react to the suspension of Muhwezi with only one day to the opening of the new Semester.

When contacted by SoftPower News on Friday to react to the suspension, Dr Muhwezi confirmed to having received the letter effecting the suspension but said he would study it before he gives a comprehensive response. He however denied ever having incited staff to engage in a strike. 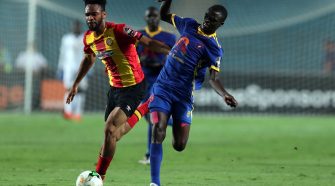