Mushengyezi has been the dean of the department of languages, literature and communications at Makerere University. He holds a PhD from the University of Connecticut in the USA

He was appointed by the Archbishop of the Church of Uganda, Rt Rev Stanley Ntagali as required by the University’s statute.

I congratulate Prof. Aaron Mushengyezi on being appointed Vice Chancellor of Uganda Christian University. This is yet another contribution Mak is making to the development of higher education in Uganda. I look forward to fruitful collaboration between Mak and UCU.

In an internal memo issued by the outgoing Vice Chancellor, he confirmed the new appointment.

Rev Can Senyonyi’s contract is set to expire in August of this year. He has been the UCU Vice Chancellor since 2010 after taking over from the first VC Prof. Stephen Noll.

He said in the memo that he began to arrange for a transition to new leadership three years ago, ahead of his retirement.

“I was concerned that the transition from my Vice Chancellorship to another should be well prepared for and given a smooth handover for the good of our beloved University,” Senyonyi wrote in the memo addressed to staff and students.

Ordinarily, it would have been an 8 months search according to the law guiding the process.

Senyonyi says he recently met Archbishop Ntagali and the Archbishop, to handover the University Council Resolution with respect to candidates for the position of the Vice Chancellor of UCU.

“On Thursday February 6, I received mail from the Archbishop’s office informing me that Archbishop had decided to appoint Associate Professor Aaron Mushengyezi, the next Vice Chancellor. I was by the same time instructed to prepare the appointment instruments for the same”.

The outgoing Vice Chancellor says he is committed to the leadership transition of the university which he says should characteristic of UCU’s reputation. 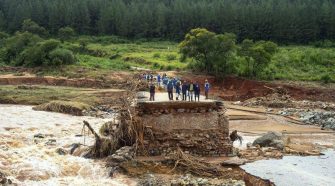