Police in Mpigi is holding a 38-year old man on allegations of defiling his 7-year old niece and infected her the deadly Human Immunodeficiency Virus (HIV).

The suspect identified as Kaweesi Joseph who is currently at Mpigi Police station on charges of aggravated defilement is a resident of Lukangu village in Kamengo sub-county.

He is a maternal uncle to the victim, a Primary Four (P4) pupil.

According to Police, the incident happened in 2017 but it was not reported to authorities because the juvenile had be threatened.

“This incident happened in 2017 and the girl victim was threatened with death if at all she revealed any information regarding this aggravated defilement,” Police spokesperson, Fred Enanga told reporters on Monday.

He says last year, the victim was diagnosed with HIV and informed her parents. She would later pin Kaweesi for sexual abuse.

“When her parents engaged Kaweesi, he also threatened to kill them together with the doctor of the medical facility. They also kept quiet until 2019 when Police got intelligence information from the medical facility on how the girl was diagnosed with HIV,” Engage explained.

Enanga says the parents of the girl were then invited for diagnosis and tested HIV negative.

On further interrogation, he says, the victim provided evidence on events that led to her defilement.

She narrated that her uncle had on separate occasions led her to the gardens at Lukangu village and defiled her.

“We managed to arrest the suspect and we reconstructed the scene and we managed to secure the victim as well. We have gotten a team of specialists and counsellors to try to counsel this young girl victim to see how she can start treatment,” Enanga said.

The Police spokesperson has further cautioned parents and guardians on relatives and friends they leave with their children, saying there are several reports indicating that children in such situations are often abused sexually.

He advised parents to be on the look out for the early signs of sexual abuse against their children.

He said parents should also come forward to immediately report such incidents so as to mitigate the degree of danger of the abuse.

“For example, in this case, if the victim had alerted the parents that very day, we would have put her on sexual assault drugs – Pos Exposure Prophylaxis (PEP),” he said.

PEP is administered after being potentially exposed to HIV to prevent becoming infected and must be started within 72 hours after a recent possible exposure to HIV, but the sooner you start PEP, the better. 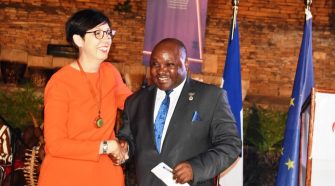