Police in Nakasongola district have intensified search of a killer who Thursday murdered four people by using a panga to chop off their heads.

Enanga explains that the terrifying chain of events began at around 2pm on Thursday when a yet to be identified assailant attacked a one Meshach Mawanda, a 10 year old male juvenile at Wabigalo village who was following his mother at a nearby charcoal burning site and chopped off his head to death.

Moments later, police which was still at the scene, would be notified of another related case of murder of a 7-year old juvenile in the same locality.

“The police received information about a second incident of murder by hacking, of Sekanza Amos, a 7 year old male juvenile, which occurred at Kyalubambula Village, Kyankonwa Parish, Kakooge, Sub County, in Nakasongola District. The victim who was in the company of his mother was grabbed by the attacker, who chopped off his head with a panga,” explains the police spokesperson in a statement.

He says the victim’s terrified mother fled during the attack and while narrating to the police she described the attacker as a male adult in mid twenties, dark skinned, medium size and height, with a haircut, and was putting on a sleeveless t-shirt with a design in the centre and a black trouser.

About 10 minutes later, Enanga says they received more information about another murder, by hacking, at Wabigalo village, of Judith Adur, a 30 year old, female adult.

“She was attacked from the back, while carrying firewood, heading to Wabigalo trading centre, and her head chopped off”

A few minutes later at around 3.15pm, another victim Matovu Rosio, a 93 year old, male peasant was reported to as well have been murdered by hacking at Wabigalo village from his homestead. His head was also chopped off.

The police spokesperson says the motive of the killing is yet to be established and that the search for the suspect is on. He appealed to the residents to remain extra vigilant since the killer is still at large.

“The hunt for the suspect has now entered day two and is still ongoing. At this stage, the motive of the random act is not yet established. And we would like to caution the public within Wabigalo and Kyankonwa parish, in Nakasongola district, that the panga-wielding suspect has not been identified yet and is considered dangerous. We believe he should still be hiding within the area,” Enanga adds.

Meanwhile, during the operation, police stray bullets caught Mutegesi Calvin, a 29 year old, male adult who died of bullet injuries as he was rushed to Nakasongola Military Hospital.

Enanga says police has already reached out to the family of the deceased and that they regret the incident. He says investigations are already ongoing into the matter. 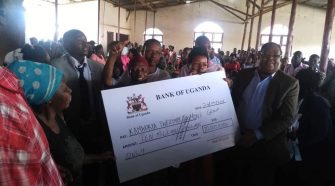