Fear and sorrow engulfed residents of Kanaaba in Ndejje sub-county in Wakiso district on Saturday when they found bodies of a man and his wife lying lifeless in their house.

The man identified as Vincent Bukulu was found on bed with foam in his mouth but the wife (Grace) was found under the bed in a smelly pool of blood. The woman’s body had a huge cut on the lower abdomen through which some inner parts could be seen cheeping out.

According to an account given by the deceased couple’s house help, the two who had travelled to the village in Bushenyi, western Uganda for some weeks, returned on Thursday evening and had a fight in the car when they reached home.

“When they entered the bedroom, I did not see Mummy (deceased woman) again. Daddy (deceased man) came out and told us that Mummy was tired and wanted to rest and we also slept,” the house help narrated to SoftPower News.

On Friday, she said, Vincent told them that his wife had travelled somewhere early in the morning and that she would return late at night.

“In the evening, he instructed us not to open their door on Saturday morning and not to give access to any visitor who may be in need of them, since they were so tired and wanted enough rest,” she added.

She says on Saturday, she obeyed the directives and conducted her house chores as usual. Later, at around 6pm, she sent one of the children to call the couple for lunch but the child said the door was locked.

It was at this point that she got concerned and knocked on the door while calling them but with no response. She then alerted the neighbours who tried ringing on their phones but were switched off.

They subsequently forced their way into the bedroom only to discover lifeless bodies.

Police was alerted which responded and ferried the bodies to Mulago hospital in Kampala for postmortem.

It is suspected that the Vincent could have murdered the wife on Thursday and committed suicide on Friday.

Vincent’s last post on Facebook, on Friday, was of over 20 photos of him and Grace which he captioned; “With my sweetheart till the last breath”.

The couple survived by four children (all minors).

By press time, Police had not given a comment on the matter. 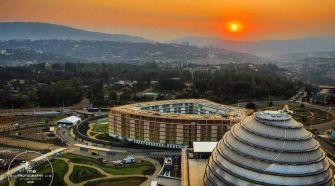