Government’s wage has grown from Shs 2.8 trillion in the financial year 2015/2016 to Shs 5 trillion in 2019/2020, representing a 42.5% growth of the wage bill in the last four years, attributed to the increment of salaries of public workers like scientists.

The Ministry of Public Service has highlighted pay rises for some public servants such as health workers, Scientists, University Professors, Researchers, as one of the achievements of the 2016-2021 NRM Manifesto so far.

This as different sectors of government are taking stock of how much of the manifesto targets have been achieved and what remains.

Minister of Public Service, Wilson Muruli Mukasa said that salaries for health workers, Scientists, University Professors, Researchers and the Public Service generally were scheduled for enhancement taking into account benchmark jobs in the country and the region, in phases.

Government has since approved the pay policy principles and long term pay targets for all public servants under Cabinet Minute Nos. 502 (CT 2017) and 509 (CT 2018). As such, salaries for a number of civil servant categories under phases 1, 2 & 3 have been enhanced.

The overall wage bill of Government has over the years increased from Shs 4trillion in the 2018/19 financial year to Shs 5 trillion in 2020/2021.

“Under the budget for FY 2020/2021, more funds have been provided to enhance Associate Professors, Professors, the Vice Chancellors and Deputy Vice Chancellor as well as researchers under NARO to 100% of the long term pay targets. Other Teaching staff and Scientists in Public Universities have as well been enhanced,” he said.

The Minister revealed that government will continue to provide resources to implement the approved long term pay targets for all Public Servants in a phased manner.

In other achievements, a total of 7,874 ghost pensioners worth Shs 2.6bn per month were for deleted from September, 2019 payroll, achieving efficiency in managing the Public Service through.

This resulted from the introduction of the National Identity Card to help in the fight against crime, tax evasion and corruption by eliminating ghosts on the pay roll. Biometric validation and census of all public Servants and pensioners was undertaken and an interface between NIRA and the payroll system was established.

Government is in the processing of implementation introducing Human Capital Management System (HCM) which will seamlessly integrate with all Government systems such as the budgeting and payment systems under Ministry of Finance. This will ensure operational efficiency, reduce cost of doing government business, strengthen controls, and manage performance of all public officers and government institutions.

In addition, the Ministry of Public Service implemented the Hard to Reach (HtR) policy which was approved by Cabinet and introduced 30% hardship allowance for health, education and agriculture extension services in designated 16 Local Governments.

This, Mukasa says, has significantly increased the staffing levels in those districts to over 85% by 2021 in addition to addressing issues of retention, absenteeism and staff motivation.

Government has undertaken a review and recommended enrolment of 22 new districts and 89 Sub-Counties as hard to reach spots. This is expected to be implemented under the 3rd National Development Plan (NDP III).

The Minister said government has strengthened its Human Resources through the provision of budgets for recruitment.

The staffing levels are projected to rise to 68% in FY 2020/2021 with additional funding and provision for recruitment of teaching staff in Public Universities, Primary and Post Primary Teachers as well as Health Workers under the UfIFT program.

Under NDP III, staffing levels shall be further increased to an average of 80% with prioritization to the Health, Education and Production sector in addition to Scientist positions being filled to 100%. 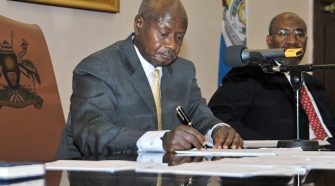