The construction of new classroom blocks as well as other physical infrastructure like technical colleges, laboratories and business incubation centres at different universities has dominated the progress made by government in its 2016 pledges in the education sector.

To date, government has constructed a total of 53 classroom blocks in government aided Primary Schools across the country. In addition, 12 new Seed Secondary Schools have been established.

This was revealed by the Minister for Education, Mrs Janet Museveni on Monday while she interfaced with the media to take stock of what has so far been achieved in the education sector in the NRM Manifesto. The press briefing was held at Uganda Media Centre.

Janet Museveni also highlighted some of the ongoing civil works for technical institutions under the Business, Technical, Vocational Education and Training (BTVET) program.

These include Bamunanika in Luweero currently at 35% of the works, Kiruhura (45%), Hoima School of Nursing (65%), Arua School of Comprehensive Nursing (30%) and Uganda Technical College (UTC) Bushenyi (50%).

The others are UTC Kichwamba in Kabarole district at 85%, Kibatsi in Ntungamo at 85% and Kalongo in Agago district which is 90% complete. UTC Kyema, Ahmed Seguya in Kayunga and Tororo have been completed.

This is in line with the presidential pledge in his Manifesto to provide every district with at least vocational technical school by the end of 2021.

At the level of university, a total of 17 structures have been constructed and completed at 9 public universities. These include four business incubation centres at Gulu and Kyambogo universities as well as Mbarara University of Science and Technology (MUST) and Makerere University Business School (MUBS).

At Soroti University which is soon to be opened, civil works are 93% completed with a laboratory block, one storeyed teaching facility and four storeyed multipurpose academic block constructed.

In the field of Sports, the Minister said that; “We have supported the establishment of sports facilities across the country, for instance the High Altitude Athletes Training Centre in Kapchorwa”.

She said that this sector has facilitated several sports individuals to participate in international games.

The funding for National Council for Sports has been increased to a tune of Shs 11.6 billion to cater for FUFA, She Cranes, Commonwealth Games and other sports Associations, the Minister said.

Beside improving the physical infrastructure, the Ministry outlined other achievements, including the review of the lower Secondary School curriculum, provision of digital science and mathematics software to 70 Secondary Schools and the implementation of the Early Childhood Development Framework.

In assessing the performance, the Executive Director of the National Planning Authority Dr Joseph Muvawala said the progress so far made in the education sector was commendable.

“We are doing well in the education sector. We note progress. We see a reduction of parishes with no Primary School. In addition, over 90% of the children supposed to be in school are in school,” Dr Muvawala said.

He however noted the need to increase funding to the sector to meet the growing population as well as addressing the question of quality of education.

The Minister similarly stated that the limited participation of parents in supporting the UPE program remains problematic.

She further cited challenges like limited funding to the sector, poor nutrition which results into school drop outs, the skewed perception towards vocational and technical training among others. 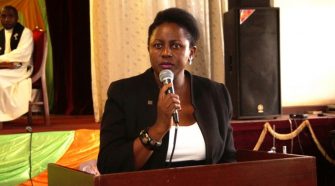