Oposition Democratic Party (DP) President, Norbert Mao has expressed disappointment that President Yoweri Museveni kept members of the Inter-party Organisation for Dialogue (IPOD) for over 9 hours during the summit in Entebbe on Monday.

The Summit of party presidents under the chairmanship of DP president Norbert Mao, held at Protea Hotel, comes second, the first having been held in December 2018 in Munyonyo.

The meeting according to the agenda that was laid down was meant to begin as early as 9:30am but up to 6:00pm, President Museveni who had confirmed his attendance for the summit had not yet arrived at the venue.

This delay prompted Mao to express his disappointment with President Museveni keeping his fellow party leaders waiting for over 9 hours.

“As you know, the summit was supposed to take place last week on 15th in Lira but it was postponed to today on his (Museveni) request, it was an agreed date at an agreed venue,” Mao told reporters at Protea Hotel.

“We were supposed to kick-start the summit at 9:30am, we were then told that President Museveni was still in Arua and he would only arrive in Entebbe at half past 12 noon”.

Mao said that later, the waiting delegates were told that Cabinet meets every Mondays and that President Museveni had decided to attend the Cabinet meeting.

“I don’t want to speculate but obviously this means that he has put the summit at a lower priority and to me, that is very disturbing because this meeting is very important and requires his presence. Many of the issues on the IPOD summit agenda require action by government,” Mao said.

The DP President noted that in case Museveni doesn’t arrive for the summit within half an hour, he would then call off the meeting to a later date.

It should be noted that the opposition Forum for Democratic Change (FDC) party vowed not to attend the summit since a number of issues that they have since raised have never been addressed.

The summit is expected to among others adopt draft regulations over the implementation of the Public Order and Management Act (POMA).

The party Presidents are also expected to discuss and take decisions of the management of Independent candidates as sell as sharing of the political party funds released by government. 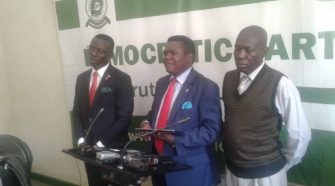