The Democratic Party (DP) President, Norbert Mao has come out to apologise to the media fraternity for failing to keep time.

His apology came after journalists boycotted the party’s weekly press conference in protest of Mao’s poor time management which they say has become perpetual.

An hour and a half after the official time (10am) at which the news conference ought to have begun, the DP President General who was nowhere to be seen.

This angered the group of reporters that had converged at the DP headquarters in Kampala to cover the event.

The journalists led by a CBS reporter, Shalif Lukenga noted that it has become a habit for Mao to make journalists who cover the weekly presser wait for hours only to come and address them after for even longer hours.

“This is not the first time, we have always warned that we are tired of this habit. It’s time the DP leadership understood that we are always working on deadlines. They should stop taking us for granted and value the time that we take off to cover their events,” noted one of the angry journalists.

The bitter reporters walked out of the DP board room in protest.

On learning about the incident, Mao reacted by tendering in a public apology and vowed to put his house to order.

“I sincerely apologize for coming late for the weekly DP Press conference scheduled for Tuesday, August 13, 2019 at 10am. I was informed that you left the building in protest before I arrived. This is understandable and we have noted your concern, you made your point,” Mao said.

Mao noted that the delay was as a result of events outside his control.

“I truly regret that I arrived late, I value your time and it was never my intent to inconvenience you”.

“I take complete responsibility for the entire sad episode and I hope that the healthy relationship between the media fraternity and the Democratic Party shall continue,” Mao noted. 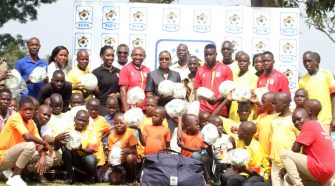