The President General of the Democratic Party (DP), Norbert Mao says the exit of Kampala Mayor Erias Lukwago from the party, was long overdue and will give chance to the party to organise itself and stabilize.

Lukwago and his wife were Tuesday morning unveiled to the public by the Forum for Democratic Change (FDC), as members of the party. He joins the Najjanankumbi based party from DP.

The Kampala Mayor who also serves as the Vice President of the Dr Kizza Besigye led ‘People’s Government’ pressure group, MPs Betty Nambooze, Joseph Ssewungu, Medard Ssegona, Mathias Mpuuga among other leaders, have for long disagreed with the leadership of Norbert Mao, whom they among other things, accuse of failing to steer the party to the right direction. They say he has no respect for the constitution of the party.

At Najjanankumbi where Lukwago was unveiled, he revealed that he had taken the decision to join FDC as a seasoned politician not as a political schemer. He asked people including fellow politicians to respect his decision.

However, at a press conference on Tuesday, DP President, Mao said it was time for the ‘worms’ to leave the stomach so that it (stomach) gets some relief.

“The party has been having a measure of turmoil comparable to a stomach upset. If you have a stomach upset, it means the substances in the stomach are not agreeing with each other and so, some have got to leave, you don’t close the exit. Some will exit as solid or gas and others as liquid and thereafter, the stomach will be settled. DP is open to entry and exit and we have no problem with the choice our members make,” says Mao.

He noted that DP is known for truth and justice all applied in a multiparty dispensation thus they can’t be the very ones blocking members from making political decisions of their choice.

Mentioning names of some top DP members who have since fallen out with his leadership and describing them as “movers and shakers in the politics of Uganda”, Mao said the party which spotted and supported them to the positions they now occupy, is proud of them for their contribution towards the development of the country.

The DP boss however compared members who have been downplaying the contribution of the party and finally opted to join other parties to wild cats which distance themselves further from the mother cat during hard situations.

“Unfortunately, many of those whose profile we built, have been at the forefront of demonizing the party, blackmailing and insulting DP leaders but we don’t mind that. You know when a cat gives birth, there are real cats and there are wild cats – the ones known as ’emiyaayu’, and the mother cat knows how to distinguish between them. It creates a situation that intends to frighten the little kitten and in such a situation, the real cats will come closer to the mother cat but the wild cats will run to the bush. That is how a mother cat determines which one is a real cat and which one is a wild cat,” Mao explained.

Meanwhile Mao reaffirmed that the party is at the final stages of holding the national Delegates Conference without going against COVID-19 guidelines issued by the Ministry of Health. 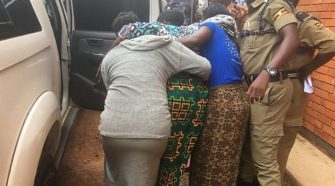