Democratic Party (DP) President, Norbert Mao has threatened that DP will denounce Deo Njoki who has been the party candidate in the upcoming election for Busia district Chairperson, should he accept the appointment by government.

On Monday, there were media reports that Deo Njoki had quit the Busia electoral race after he received a letter appointing him to be part of the Uganda Human Rights Commission, the government rights watchdog.

In a letter he wrote to the DP Secretary General on November 10, upon learning of his appointment, Njoki stated that; “The initiative to seek to serve as a member of the UHRC was mine and was made way back before the program for the by-election for the office Chairperson Busia District had been announced”.

He said that if approved by Parliament, he would “as a citizen, consider serving my country as a member of the UHRC” and further asked the Democratic Party to support him.

But now, the Democratic Party President, Norbert Mao has in a tweet on Monday described Njoki’s nomination to UHRC as “bait” and cautioned him (Njoki) against falling for it.

Mao said the development, which comes only two weeks to polling day, is nothing short of intrigue. He stated that for Njoki to consider the appointment by government would be “treachery”.

“I confirm that our candidate for Busia LCV Chairperson Mr. Deo Njoki has been nominated to the Uganda Human Rights Commission,” Mao said in a tweet on Monday evening.

“I have strongly urged him to say NO!!! Biting the bait would be extreme treachery. He will be denounced as a deserter and treated as such,” the DP President added.

In the race for the Busia district Chairperson, Njoki was facing competition from the ruling NRM’s Paul Boniface Oguttu as well as Chrispus Bwire, Tony Ojambo and Geoffrey Wandera, all the three independent candidates.

If Njoki pulls out of the race, Oguttu will have an upper hand to lead the race.

The FDC Deputy Secretary General, Harold Kaija while addressing the press in Kampala appealed to FDC supporters to rally behind DP’s Njoki for the position of LC 5 Chairperson.

In the last general elections, Njoki lost elections to the ruling NRM candidate, Ouma Adeya but contested his victory in courts of law over election malpractice which case was ruled in his favour. 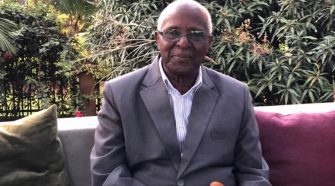