Thugs took advantage of the mandatory wearing of face masks in public to rob the money from workers of  the forex bureau in Kisenyi, Kampala.

The three had left their office in Kisenyi aboard a Toyota Wish registration number UBD 448Y. They reportedly drove to Diamond Trust Bank (DTB) Equatorial Mall branch where they withdrew Shs 380 million.

The group afterwards proceeded to Stanbic bank Nakivubo branch where they deposited Shs 80 million. At around 12 pm the trio left Stanbic bank with a balance of Shs 300 million which was carried by Hassan. They were attacked by thugs who were wearing surgical masks, as they returned to the parking yard at Equatorial mall.

“The thugs grabbed the bag containing the money and jumped on motorcycles and rode off to an unknown destination,” Owoyesigyire said.

Fatal rushed to Kampala central police station (CPS) and filed a case of robbery on case reference CPS KLA CRB 607/2020. There is suspicion that the thugs trailed the trio right from Kisenyi and kept monitoring them until their target was encircled.

The Flying Squad Unit tried to pursue the suspects after being notified, in vain. Owoyesigyire said that one suspect who had been arrested has since been released since there was no information linking him to the crime.

Unfortunately, Closed Circuit Television (CCTV) cameras could not swiftly identify the facial features of the suspects. This has since left people including some police officers wondering whether the compulsory wearing of masks would not hamper the ability to detect and fight crime since some facial features are being covered.

“If a thug robs money or other valuable and he runs into crowds wearing masks it could take ages to trace him. People have been suspicious of whoever wears a mask but now it’s going to be a norm,” a detective said.

Nevertheless, police spokesperson, Fred Enanga, says even someone covers the mouth, nose and eyes, the CCTV cameras have the ability to identify the suspects using other features. 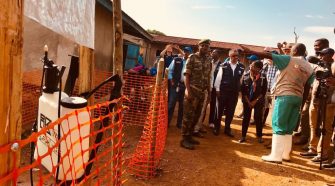 DRC: WHO Says Conflict in Area a Barrier to Stopping Ebola, Wants Safe Passage for Responders