Mbarara Municipality Mayor Robert Mugabe Kakyebezi has recorded a statement at Police over allegations that he is instigating political sectarianism.

A row has erupted between Mbarara Mayor Kakyebezi and Mbarara district NRM vice-chairperson, Herbert Kamugisha in the lead up to the 2021 elections.

This started almost a month ago when rumors started circulating, alleging that the Mayor Kakyebezi was behind a scheme to draw the Bishop of Ankole diocese, Sheldon Mwesigye into politics.

It all started on May 20 when Kamugisha officially announced his intentions to stand as a mayor for Mbarara a city.

Now reports allege that Bishop Sheldon is promoting Kamugisha who is the head of the laity for Ankole diocese and also doubles as NRM vice chairperson for Mbarara district.

Kamugisha has been silent on the allegations until yesterday, Monday when he held a news conference confirming that he has reported Mayor Kakyebezi to the Police for using sectarianism to promote his political ambitions in Mbarara.

“I don’t know why people are worried. I don’t know their intentions. So we are yet to find out because I went to the police and reported the case on Saturday at around 10am. I equally tendered in my exhibits including those posters and audios,” he said.

However, he advised Kakyebezi to wait for the election time.

“When I declared my intention, he got worried. But he should understand that he is not a mayor of the city actually by 2020, that post will no longer be there. We will all come as new candidates, if he has intentions to come let him declare so that we know that we are vying for the same seat” Kamugisha advised.

However, he alleges a group of people who are using his name on social media especially Whatsapp to promote sectarianism among the people of Mbarara.

“I am a leader who portrays a message that people should be cooperative and not dividing them along religions and tribes. Those who are doing that want to defame my name”.

He quashed the allegations claiming that a group of yet to be identified people are circulating photos of Kamugisha merged with the Bishop Sheldon Mwesigwa on trending on the streets of Mbarara town.

“I have no hand in that. Nobody I have bought to tell lies even police is investigating. My job is to work for the people of Mbarara not to divide them” explained Kakyebezi.

“If you get the bishop of Ankole diocese and put him  in NRM party emblem and you add on an Anglican candidate, that means you want to divide the people of Mbarara and Uganda at large  on religious line which NRM government fought in  1986”.

He directed Police to take on the matter so the culprits are brought to book.

“When we saw it in social media it was a very big concern and we put security to investigate. On Saturday Mr. Kamugisha gave us information in a meeting he gave us an envelope full of same posters we had earlier seen on social media with intentions to defame Kamugisha and the bishop”

“We advised Kamugisha to report the matter to police as I talk now police is aware and statements have already been recorded”.

“Police must investigate we need a report immediately among the two who is behind this game of tampering with the country’s security. Whoever is behind this will be answerable” said Turyabagyenyi

Police publicist for Rwizi region, ASP Samson Kasasira also confirmed that investigations are underway and a file of sectarianism has been recorded in the general inquiries.

He however said that since the offence is civil in nature, Police has advised the complianant to seek legal counsel and take the matter to courts of law.

“I have talked to the OCCID. They have opened up a general inquiries file into the matter but as of now, what stands is sectarianism. However, the matter is largely civil so they have advised the complaint to seek legal redress. To use a lawyer to sue the other party”.

He added that Police will equally not close the file but keep on with investigations.

“Of course, Police is not closing the file. They are going to keep up with inquiries into the matter”

Kamugisha, who claims to be a staunch Christian told SoftPower News that he is not giving up on the matter

He instead promised to battle with the mayor to end what he termed as politics of sectarianism.

“As an NRM vice chairperson in the district, I don’t support such sectarian moves. We caution those people bringing sectarianism in Uganda to stop Museveni chased away all that after coming from the bush and became the president of Uganda. People should not be diverted. And any elected leader has to be uniting all religions which is not a case for these people’s intentions,” said Kamugisha. 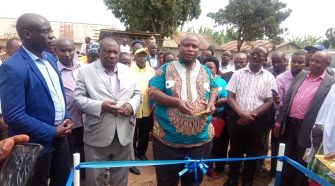 NWSC Extends Piped Water to Over 10,000 in Remote Bushenyi