MBARARA – Nyamityobora councillor, Amos Katureebe who was poured acid in 2017 causing him sight loss has requested government to support him financially so he can be able to travel abroad for an eye surgery.

He made the request this on Tuesday this week during an exclusive interview with SoftPower News while speaking from his home in Mbarara.

Katureebe was poured acid by unknown people on 8 November, 2017 while walking home in Kirembe cell in Kakoba division in Mbarara municipality.

Police would later arrest 5 suspects including the municipality Speaker, Bonny Tashobya Karusya. The suspects were paraded in court, charged, and four of them found guilty and later convicted.

The incident (acid attack) occurred  a day before Katureebe was scheduled to testify before the Justice Catherine Bamugemereire land probe.

He suspects the attack was triggered by a meeting he had chaired to censor the municipality So, Bonny Tashobya who had allegedly sold municipality land opposite Stanbic bank. Katureebe claims Shs 180m was shared amongst the executive leaders and some councilors in the municipality but he refused to take the money.

The victim was at the time representing people of Nyamityobora B ward in Kakoba division, Mbarara municipality.

Since 2017, Katureebe has been admitted to a number of hospitals including Mengo, Mulago and others in hope that he will recover. However his situation became complex because of the acid burns. And he has never recovered his sight.

His only hope to see again is if he manages to travel for specialized medical treatment abroad.

“First of all, I am now focusing on healing, there is now a great improvement. I am even expecting to go abroad for eye surgeries,” said Katureebe.

He however needs over Shs 150m to facilitate his travel abroad for eye surgery. And he is appealing to government to come to his aid in mobilizing these funds.

“I have good Samaritans who created the ‘Save Amos Initiative’ and they have already raised at least Shs 12million on my account. But when you add other expenses, it comes to almost Shs 200m meaning that much more is still needed,” Katureebe told this news website.

“I request the President to contribute for me because I was serving government to make sure that Ugandan property is not stolen by selfish leaders,” Katureebe explained.

According to preliminary arrangements, Katureebe will be flying to the U.S in April this year for the surgery.

“If it all goes well, I might fly in April to USA for eye surgery”.

On his political career, Katureebe told to SoftPower News that he is ready to contest in 2021 to continue serving the people of Nyamityobora ward in the municipal council.

“If all goes well, i am very willing to serve my people and they know how I used to serve them. They still trust me because they usually come here to check on me asking when it is i am going for the surgery”.

Katureebe however encouraged his supporters to remain calm and pray for him to normalize.

He thanked his constituents for the support they have offered him during the difficult time. 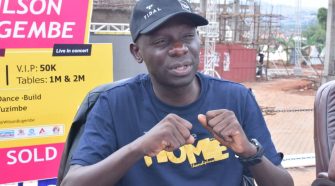