The MP for Mbarara municipality, Michael Tusiime has asked that the newly erected beautification at the main roundabout in Mbarara town be taken down.

It follows a storm of negative comments from Ugandans on social media criticizing the move to sideline the historical cow monument that stands at the same site.

For many years, the roundabout has popularly been named ‘Aha Mahembe G’ente’ descriptive of the statue of a cow which depicts the historical culture of the Banyankole as cattle herders.

While the statue has metamorphozed over the recent past, with numerous facelifts, the latest has particularly sparked an uproar online.

Critics of the new facelift in Mbarara are using the hashtags #BringBackOurCow and #RestoreRusiina to express their displeasure.

The area Member of Parliament, Michael Tusiime is the latest to pour out his disappointment.

“It is my humble opinion that this thing should be pulled down immediately in line with preservation of our cultural heritage and in the same vein, we have mobilised resources to put a new statue that befits the intention,” the legilator posted on Facebook on Tuesday.

Meanwhile, telecom company Airtel Uganda has also issued a statement denying involvement in the new development. The same roundabout bears a clock tower which was years back put up by Airtel.

When initial reports regarding the new beautification emerged, many attributed the project to Airtel.

However, Airtel says it is not beyind the structural changes.

“There have been some erroneous reports on social media regarding Airtel Uganda’s association with the new structures on the Mbarara roundabout,” the telco wrote in a statement.

“Airtel Uganda would like to notify the general public that it is not behind the structural changes of the Mbarara roundabout”.

The Management of Airtel said the telecom company only supports the clock’s maintenance and advertises on the clock tower. 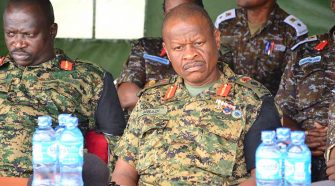 Gen Mbadi: UPDF to Roll Out Countrywide Recruitment of LDUs