Lagony Daniel popularly known as Lucky Daniel Artist is one of the greatest uprising talent from Northern Uganda’s district of Agago.

His musical career dates back to 2005 while still a student at Lira college where he was inspired into music by one Great Moses of the Devin Destiny, a local music dance crew that was more into music dance and drama during Church related events.

“In 2008, I visited Nairobi under victory church Lira while on ministerial work during the international youth conference and that was the time I discovered my worth in the field of arts and entertainment” said Lucky Daniel.

Upon his return, he released his first single love song “Maa Yenyo kayweyo” which quickly became a hit across the region.

In the same year, he scooped his first gig with Atwonga Entertainment that had booked Bebe Cool for his Northern Uganda music tour.

“Like I told you, I was a student by then and I was pleased to sing alongside Bebe Cool as a curtain raiser. For me it was a done deal because I tapped into the power of the ground to fit in the society with my songs”

By mid 2019, Lucky Daniel released his second song, Anyira Loyo Muduku an education song following the wake of events in the region but this came with a lot of challenges.

He had spent a lot of time partying and struggling to find his landing in the music arena and had forgotten about books yet exams were knocking.

He says he had to abandon his musical career and focus on his education since he was in the final year and semester. As luck would have it, he read and passed his exams to later graduate with a Diploma in Motor Vehicle Technology from Human Technology Development training institute.

The singer returned to his village in Adilang but shortly got a job as a mechanic with Lamco Tek Engineering workshop in Kitgum.

While there, he also worked as driver and his years of experience as a mechanic as well as a driver landed him a job with the Uganda Police force in 2009.

Softpower News asked him how he balances his daily work chores. He says that he is ever available for his daily duty call as a police driver and uses his free time to visit the studio.

Asked why he insists on singing yet he already heard a paying job at hand, Lucky said the dark history of northern Uganda propelled him to singing with the hope that he could heal some souls through his music.

He’s optimistic to have great hits and videos before the year 2018 ends.

“I Even Thought About Changing My Name” – Jackie Chandiru on Relapse, Quitting Social Media 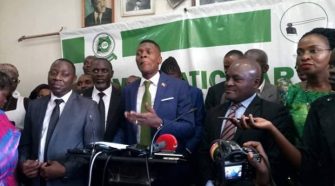 “I Joined Politics Because Museveni’s Regime Has Betrayed Us” – Chameleone