The new party whose formation stemmed from the disagreements that some of the leaders had with the leadership of Forum for Democratic Change (FDC) in late 2017, has finally held its launch after thirteen months of preparations.

A number of dignitaries, civil society leaders as well as politicians have been unveiled as leaders that will coordinate the party and mobilize structures ahead of the party’s first Delegates’ Conference scheduled to take place in a year’s time.

The party unveiled the former FDC party president, Gen Mugisha Muntu as the National Coordinator who will lead the party to the National Delegates Conference.

Muntu is the founder of the party which prior to the formal registration identified as New Formation. Last year, Muntu, a former President of the FDC announced he would launch a new political party, after quitting the FDC.

The former army commander cited failure to reconcile his strategy and that of the FDC as reason for his decision to break away.

The Alliance for National Transformation has also unveiled Former FDC Vice President for Eastern Region, Alice Alaso as the Coordinator of Finance and Administration, and Nyanja Musoke as the Deputy National Mobilizer.

A team of elders has also been set up which includes; Yokasi Bihande, Dan Wandera Ogalo and Dr. Muniini Munera a former FDC coordinator for Diaspora.

The party’s coordinator for International Diaspora Affairs is Barbra Allimadi and Florence Ibi Ekwau will be Coordinator for Parliament Group. Wilberforce Seryazi is the party spokesperson and he will be deputised by Sulaiman Kakaire.

The party has also appointed Christine Abia as the National Treasurer deputised by Ismail Badoge.

A number of regional coordinators have also been appointed who include; Owek. Sewava Serubiri for Central Region, Jackson Wabyona for Western Region, Hannington Basakana for Eastern Region and Phoebe Ochan for Northern region.

While addressing the gathering at Kampala Serena Hotel, Muntu pledged to Ugandans that the new party will bring and foster a new political culture in the country. 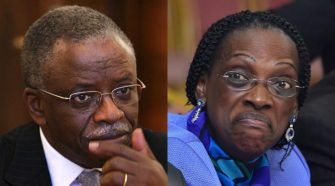