Mengo Hospital has come out to explain the circumstances under which the daughter to former Presidential Press Secretary, Tamale Mirundi, Monica Namatovu died while giving birth on Saturday.

On Saturday, while appearing on Top radio Mirundi noted that his daughter died because she had not paid Shs 600,000 to Mengo Hospital required to receive an injection that prevents blood clotting for expectant mothers.

“My late daughter needed an injection amounting to Shs 600,000 which prevents blood clotting but she didn’t tell me that the husband could not afford the money, she has been avoiding me for four months now. The husband only put there Shs 200,000,” Mirundi said.

“Why can’t the health ministry and doctors tell the public that this injection exists? If I had landed on that doctor coming along with the medical report, I would have grabbed him,” he added.

He revealed that he had received a text message from unknown people he referred to as ‘mafias’ asking him “whether I had seen what they had done to me.”

Now, in a statement by the hospital’s Medical Director, Dr Rose Mutumba, the deceased died after suffering a cardiac arrest moments of bleeding.

She says Namatovu was admitted on June 15 at 5:30pm in early labour and managed by two senior specialists and obstetricians.

“Upon delivery of a baby at 7:30pm, Namatovu started bleeding profusely. All emergency surgical and resuscitative interventions were carried out by Mengo Hospital team of specialists,” writes Mutumba.

She says through admission, the Hospital kept the family updated on every step until the moment she suffered a cardiac arrest and that a family conference was held as per the hospital’s Standard Operation Procedures.

The deceased was buried on Sunday Matale Village, Kalisizo Sub-County in Kyotera District. 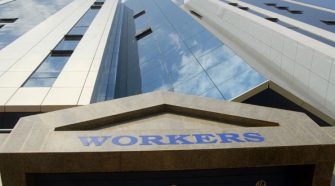