In the afternoon of Friday 5 June, fire gutted one of the three deity houses “Enyumba za Balongo” at the Kasubi Royal Tombs, metres away from the main Tombs known as “Muzibu-Azaala-Mpanga”.

Speaking to the media, Buganda Kingdom’s Minister of Information, Ow’ek. Noah Kiyimba said the fire was put out with the assistance of Uganda police Fire Brigade who arrived within a short time.

“Fortunately, a team of workers and residents at the Kasubi Royal Tombs using the fire extinguishers within Kasubi managed to put out the fire with assistance from the Uganda Police Fire Brigade who arrived within a short period of time after the fire broke out. The deity (Abalongo) were protected during this period and none was destroyed during this fire outbreak, ” Kiyimba said.

Kiyimba said the particular houses are metres away from the Main Mausoleum that is being reconstructed after it was gutted by fire in March 2010. This fire destroyed most of the hats.

“This particular house is hundreds of metres away from Muzibu-Azaala-Mpanga, the main mausoleum at Kasubi Royal Tombs that is being reconstructed following the March 2010 fire. The media were today allowed to access part of the Kasubi Royal Tombs to ascertain the extent of the fire and accordingly inform the people of Buganda,” Kiyimba said.

He thanked the Fire fighters from police and residents at the Kasubi Tombs for their steadfastness while putting out the fire as investigations to establish the cause of the fire commence.

The Kampala Metropolitan Police Spokesperson, Patrick Onyango said the fire was minor and investigations have commenced to find out what caused the fire outbreak.

The Kasubi Tombs were in 2010 included in the list of world Heritages in danger. The site is a burial ground for the four kings of Buganda and a traditional architecture.

The Kasubi Royal Tombs became a UNESCO World Heritage in 2001 when it was described as one of the most remarkable buildings using Vegetal materials in the entire Region of Sub-Saharan Africa. 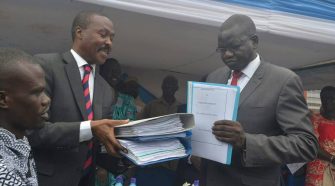 Amuriat Sworn in as FDC President, Pledges to Take Govt by Defiance