Mengo Senior School are winners of the inaugural Uganda schools Debate Championship (USDC), a national debate championship that has been running since 3 December, 2019 to 7 December 2019 at St. Mary’s College Kisubi.

Over the five days, students discussed topics from among others, the appropriate curriculum that’s suited for Uganda’s development needs to what a just tax system that can enable the development of Uganda’s SME sector would look like.

Organized by Debate Society Uganda, the championship is the climax of the society’s annual schools program which involves debate training and competitions in different regions of the country, from which schools qualify for the national finals.

This year’s championship convened over 200 students from 30 schools in the Northern, Eastern, Western and Central regions of the country. Students took part in activities including debate, public speaking and different conference sessions.

On the eve of the championship’s final, students had an interface with members of parliament in a session graced by the deputy speaker of parliament Rt Hon. Jacob Oulanyah.

Mengo senior school’s Kalinda Jamadu who emerged the best speaker of the tournament thanked Debate Society Uganda for the platform to horn his debate skills, noting “debate for me has been a lifestyle and through USDC, I have had the opportunity to interact with other brilliant minds, which has no doubt improved my appreciation of national issues and left me a better speaker.”

Closing the tournament, NRM national treasurer Rose Namayanja emphasized the importance of debate in grooming leaders, noting that she is a product of debate herself.

“Platforms like this (USDC) expose you to a diversity of opinion and perspective from across the country, which leave you a more knowledgeable person. I have been a debater since high school, and throughout my days at university. It is because of debate that I picked interest in national leadership.” 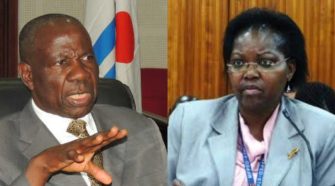