The commission of inquiry into land matters on Tuesday quizzed the State Minister for Cooperatives, Frederick Ngobi Gume in relation to 20 acres of government land sold to an Indian.

The contentious land in Jinja was sold by David Mpande, a surveyor to an Indian at Shs160 million.

The commission asked Gume to explain circumstances under which he received a shs5 million cheque from Favourite Enterprise Limited, an Indian company that had purchased the contentious 20 acres.

The state minister said in response that  the money was a debt owed to him by David Pande.

“On that  day, he asked me to go to Favourite Enterprises to pick his cheque,” Gume said.

Asked why on the cheque voucher were words ‘Wairaka Land’, Gume denied ever seeing such inscriptions.

“I didn’t know the voucher read like that. What I know is that Pande told me to pick my money from Favourite.”

The commissioners asked him why he didn’t detect that the land in question didn’t belong to Pande to which he responded that it was the duty of the district land board and surveyors to verify the matter and not him.

“We had the district land board and the area land committees that had all signed on the 50 acres title,” he said.

The land in question was initially 75 acres belonging to Uganda Land Commission but  leased to the National Fisheries Research Institute.

The land was surveyed again by David Pande who fraudulently sold off 20 acres to Favourite Enterprises  at Shs160 million. 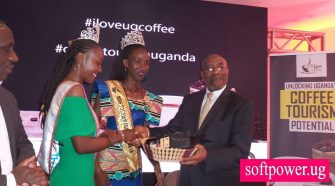