The Speaker of Parliament, Rebecca Kadaga has summoned the Minister of Internal Affairs, Gen Abubaker Jeje Odong over the state of utilities and accommodation of the Uganda Police officers living in Nsambya Police barracks.

This followed a matter of National Importance raised by Bugabula County MP, Henry Maurice Kibalya who told Parliament that the state in which the men in uniform at Nsambya barracks are living in is no devastating.

The MP said that on his visit to the facility, he was shocked to learn that the people living in the barracks have spent several months without electric power as well as water on top of living under poor sanitation.

“The situation that the officers are living in may cause you think that the barracks is not located within the country’s capital city; there is a lot of congestion, the environment is so funny and the situation is unbelievable,” Kibalya said.

He noted that it is very absurd that the men in uniform who are responsible for the peace and security of other Ugandans are living in such unbearable conditions.

While giving her ruling, the Kadaga ordered the Minister of Internal Affairs to quickly intervene and address the state of utilities of Nsambya barracks as well as their accommodation.

“During the time when Gen. Kale Kayihura was the Inspector General of Police (IGP), a project was rolled out for the construction of houses for police officers in Naguru but I am wondering what is going on, last time I flew over the place but the building are still incomplete, the Minister should also come and update us on the status of the accommodation,” Kadaga noted.

The Speaker as well instructed the Parliament committee on Defence and Internal Affairs to visit Nsambya barracks and report to the house after their findings. 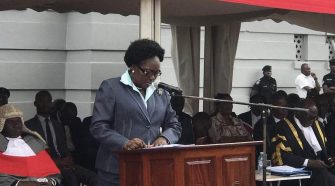