The Minister for Internal Affairs, Gen Jeje Odongo has told the newly appointed Inspector General of Police, Okoth Ochola together and his deputy, Brig Sabiiti Muzeeyi to embark on redeeming the eroded public trust within Police as an institution.

Odongo who was presiding over the hand over ceremony of former IGP Gen Kale Kayihura to his successor, Ochola admitted that police is currently grappling with a bad image in the eyes of the public. He told the newly appointed leaders to begin by doing some soul searching to establish whether they were part of the problems that got the Police to where it is to day.

Kale Kayihura has handed over a Police that has over the last few years been at the receiving end of criticism from the public due to gross human rights violations and the failure to crack down on crime.

According to the annual reports released by Uganda Human Rights Commission, Police has perennially been named the most violator of human rights of all government institutions in Uganda. At several occasions, police officers have mishandled or assaulted civilians, politicians, activists and journalists during demonstrations while in other cases, detained suspects have decried torture.

Minister Odongo told the new IGP and his deputy to take up from where Gen Kayihura stopped.

“You will need to deal with the negative image that the Police is currently faced with. It might be fabricated but it is with us and it needs to be turned around,” Odongo said during the handover ceremony at Naguru police headquarters on Thursday.

He further told the two Senior officers that “your actions will be a surer way to improve this image” and also reminded the Police Chief Political Commissar, AIGP Asan Kasingye to equally play a role.

Odongo also said that there has been a spike in the crime rate, particularly high profile cases whose prevalence has risen recently.

“These cases have painted a gloomy picture,” he added.

As part of ways to find solutions to the increased criminality, Gen Odongo proposed that the new leadership of Police examines the underlying causes of criminal acts in society.

“Crime is a function of any society. It doesn’t just happen in isolation. It is important to understand the socioeconomic conditions in societies within which we live because invaluably, those criminals are doing so not out of choice,” he said.

He partly attributed the current trend in crime to the breakdown of disciplinary safeguards that traditionally contributed to keep society in conformity with the law. 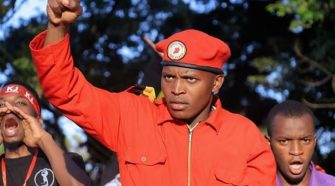