Uganda’s Minister of Tourism, Prof Ephraim Kamuntu has said that the rescue of the American tourist and a Ugandan tour guide in the Queen Elizabeth national park, is a great relief to the tourism sector.

The Minister said the development relieves the stakeholders involved in Uganda’s tourism of the pressure and anxiety that the abduction had caused.

On Tuesday last week, Kimbley Sue Endicott, an American female tourist in her 50s and Jean Paul, the Ugandan who was driving a group of tourists were abducted by four armed men.

They were traveling in a motor vehicle Reg No UAR 777E of World Frontiers Safaris Uganda with an elderly couple, also tourists. The abductors later demanded a ransom of USD 500,000 (Shs 1.8bn).

It has now emerged that security agencies in Uganda through a joint search operation have rescued the two people.

Minister Kamuntu who was Sunday speaking from Masaka on his way from Queen Elizabeth national park told reporters; “We now have this lady, she’s safe, she is secure. And the driver Jean Paul is also safe and secure”.

“We have been to Ishasha where Kimbley and the driver, Jean Paul were abducted on Tuesday. We are very pleased to inform Ugandans and to inform the relatives that they have been rescued safely, very sound”.

He said Kimbley and Jean Paul are now in the hands of Ugandan security authorities.

Prof Kamuntu said he was impressed by the cooperation and sympathy exhibited by the Ugandan media and community near the scene where the incident occured.

He thanked the two tourism agencies (UWA and UTB) for their respective roles in handling the situation.

The Minister also said there are “consequential actions which are going to be taken” but which he said can not be discussed in public at this material time.

In the national park, the Minister was accompanied by the UTB Chief Executive Officer, Lilly Ajarova and the UWA Executive Director, Sam Mwandha.

“This is just an isolated incident. This should not discourage anyone from visiting Uganda. We assure the international community that Uganda is safe. We have alot of beauty for them to come and see,” Ajarova told reporters.

It is not clear under what circumstances the two abducted persons were rescued. 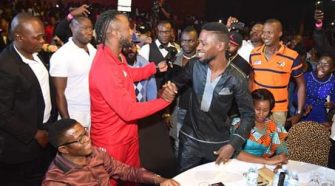 I Have No Problem With Bebe Cool, the Regime Seeks to Divide Us – Bobi Wine