The Speaker of Parliament, Rebecca Kadaga has threatened to take action against all Members of Parliament (MPs) whose comments and behaviors are found wanting in respect to the Shs 10bn that was allocated to the Parliamentary Commission in fight against COVID-19.

It should be noted that recently, the Speaker stopped all Legislators from commenting on the Shs 20m that was disbursed to each MP as part of the Shs 10bn funds allocated to the Parliamentary Commission.

However, this has not been attainable since a number of MPs have continued to express their opinions on the money that was allocated to the Commission as well as their share of the money. Some have also resorted to take the matter to Courts of law for determination.

Among the legislators that have been lined up for disciplinary action is the Kyadondo East MP, Robert Kyagulanyi also known as Bobi Wine and Mawokota North MP, Amelia Kyambadde.

While raising a matter of National Importance, Bunyole West MP, James Waluswaka complained about the words used by Kyagulanyi when he was returning the Shs20m allocated to him in the fight against COVID-19 terming it a bribe.

Waluswaka was supported by West Budama South MP, Jacob Oboth who noted that Parliament should look into amending its rules to take appropriate action against such members.

“What Waluswaka is raising is very fundamental, this is a family as Parliament, we are the children of this house, we go out and expose the nakedness of our mother and our father yet we still belong to this family, you go and state that the house had given you a bribe, is that just a blackmail or portraying bad intentions, a member loses a debate here and goes to court, if it requires us to amend the rules and the law this should be but this ping pong should stop, this is Parliament,” Oboth said.

In her ruling, the Speaker noted that it is very unfortunate that a Minister would appear before a television program soliciting for a question and later embarrass Parliament.

“I think we need to take action, how can a minister solicit a question because I saw the video in which she requested to be asked about the added 20m cash given to MPs and dramatically she rejects the money,” Kadaga said.

She added that it is absurd that the very minister who comes to the house and is supported comes out to embarrass the House.

While on NBS TV on Thursday, Trade Minister, Kyambadde said the timing of the Shs 20m allocation to MPs was wrong given that the country is in a crisis, businesses have closed and the health care system needs most of the funding to respond to the pandemic.

She however added that the MPs are faced with a lot of demands from their constituents which puts them in a very difficult position.

Kyambadde said that on her part, she will not engage in distributing food to the vulnerable groups in her Mawokota North constituency, but she will instead help some groups that she has previously trained at sub-county level on self sustainability 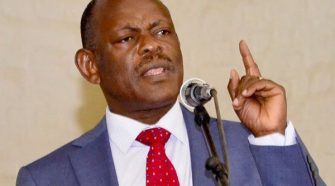