The Minister for Gender Labour and Social Development, Janat Mukwaya has appealed to teachers under the Uganda National Teachers’ Union (UNATU) to work towards creating a safe environment in schools that is free from sexual violence.

The Minister made the remarks while officiating at the 14th Annual Delegates Conference under the theme ‘The right to education means the right to a qualified teacher’.

Minister Mukwaya’s call comes at the heels of an ongoing investigation by the Parliamentary select committee into cases of sexual harassment in institutions of learning, which have become rampant.

“I think in our institutions, we are the second parent. I would like to hear you discuss the issue of those men who harass adolescents in schools,” Mukwaya told teachers who attended the conference.

“This is becoming a serious issue, we have done whatever it takes to take girls to schools, we are going to address the issue of sanitary pads, but I think we can work together as the Ministry and MPs to advocate that the schools must be safe”, she added.

She noted that since the biggest population of the teachers are women, there is need for them to create an environment that should allow girls to study without disruption.

“Schools are becoming more dangerous to our girls and this we should be able to deal with it.”

At the same event, the Minister highlighted the increased stigma of children living with HIV in schools and higher institutions of learning.

“As head teachers and teachers, you need to help these children because HIV is a factor of life, we have it here. We know there are children that have grown up with the disease”.

She revealed that during a recent meeting with young adolescents living with the virus, she discovered that the biggest issue they face was the stigma at schools. Some of them told her that due to this challenge, it was difficult for them to take their medication. 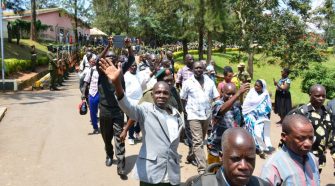