State Minister of Information and Communications Technology, Ida Nantaba has Sunday survived assassination as unidentified gunmen reportedly travelling on a motorbike, shot at her car on Sunday at around 2:40pm.

It is reported that the incident happened around Naggalama as the minister who is also the Kayunga District Woman MP, travelled from Kayunga to Kampala.

When SoftPower News contacted her, Nantaba who sounded to be in fear confirmed the incident saying: “It is true, am currently at Naggalama Police station recording a statement.”

Unconfirmed reports indicate that her guards have eliminated one of the gunmen.

Police has not yet given a statement on the matter. 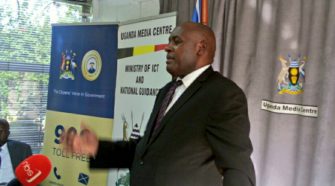