Mineral Development State Minister Sarah Opendi has dismissed as untrue allegations that she picked her husband from mandatory quarantine in Entebbe.

The Minister said the husband, Atkins Katusabe, who is also a Member of Parliament returned to the country before the guidelines for mandatory quarantine were implemented.

Opendi who was speaking on Wednesday afternoon said both her and husband have tested negative before tabling the results to the plenary.

“If anyone has evidence that I took my husband out of quarantine forcibly, let them bring it and I tender in my resignation,” Opendi threatened.

She blamed what she described as a ‘witch-hunt’ on mineral wealth cartels.

Opendi is one of the Ministers’ whose name has been circulated by media reports as having been locked out of a cabinet meeting reportedly chaired by President over their alleged flouting of measures to stop the spread of the deadly Corona Virus. 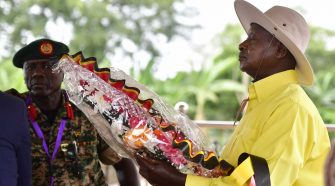 Museveni Pays Tribute to Ugandans who Sacrificed for Political Freedom