Parliament has summoned the Minister of East African Affairs, Gen Kahinda Otafiire and the Minister of Trade, Amelia Kyambadde to appear before the house and explain the continued blocking of goods from Uganda by the neighboring Kenyan authorities as well as brief MPs on cooperation between the two countries.

Currently, Kenyan authorities have since blocked Ugandas milk products as well sugar canes from access their markets and this has left many Ugandans calling on government to reciprocate.

The decision to summon the relevant Ministers followed a matter of National Importance raised by Mbarara Municipality Member of Parliament (MP), Michael Tusiime who noted that the continued act by the Kenyan authorities has greatly impact business in Mbarara and the country at large.

Tusiime said that the continued blocking on the export of Ugandan dairy products to Kenya which he has led to partial close down of some factories in the district.

Tusiime said that Kenya is the biggest market of Ugandas dairy products adding that the actions by Kenya is against the spirit of free movement of goods in the East African community.

This idea of regulating exporters of milk and dairy products to Kenya is against the spirit of free movement of goods that is guaranteed under the East African Community protocol. Some of these factories that deal in diary products especially in my constituency have started a partial close down that has led to unemployment by laying off a number of staff which affects their livelihood and the entire sector, Tusiime said.

He added that, Let the Ministers come and tell the country of the remedies that can be put in place to save the sector and government of Uganda should intervene expeditiously to engage the Kenya authorities to find a logical solution to save the sector that employs about 8 million people.

This prompted the Speaker of Parliament to direct the Ministers to come and advise the country on the matter as this is not first item that Kenyan government is blocking entry of goods into their country.

“It’s interesting that this matter has been in the public domain for some months but we havent heard the government position and within the East African community, these are non-tariff barriers to trade; let the Ministers come and advise the country because now it is diary, there other day was it sugar cane, we need to know what we are supposed to trade with Kenya,” Kadaga ordered. 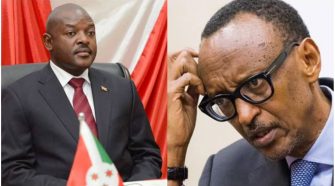