The Ministry of Defense is seeking a sum of Shs 130 billion to facilitate the operations of 23,919 Local Defence Unit (LDU) personnel that were recruited to assist in addressing urban criminality in the country.

While appearing before Parliament committee on Defense and Internal Affairs, the Deputy Chief of Defense Forces (DCDF) Lt Gen Wilson Mbadi revealed that the Ministry has a Shs 14.9bn wage shortfall for the LDUs for the last financial year.

Gen Mbadi said that a total of Shs 26 billion wage shortfall has been recorded in the current financial year 2019/2020.

“Other shortfalls include a sum of Shs45.3bn on clothing, Shs 39.7bn on food and LDU operations and training at Shs4.6bn,” Gen Mbadi said.

He noted that the recruitment of LDU’s created a number of budgetary implications for the Ministry which has created pressure on the approved Ministry of defense budget.

The Minister for Veteran Affairs, Bright Rwamirama told the committee that the shortfall came as a result of the Presidential directive to have the LDUs paid for the three that they were on training.

“The LDUs were recruited from our villages to help in beefing up security but we don’t pay them for the three months they are on training. They raised concerns that they left their families, to serve the country and should take care of them”.

“The President ordered that we should pay them for those months yet the money had not been reflected in the budget which brought a shortfall,” Rwamirama said.

Last year, President Museveni ordered for the recruitment of 24,000 LDU’s to end the spate of crime in the country which saw a number of Ugandans gunned down, kidnapped and robbed. 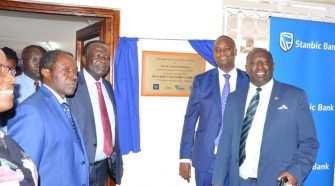