A story ran by the Daily Monitor on Tuesday reported that three pre-term babies died last Thursday after the oxygen in the cylinder they were sharing got used up.

Quoting sources, the daily stated that medics working at the facility which currently handles patients from Mulago hospital’s obstetrics and gynecology department has had persistent lack of oxygen often resulting into avoidable deaths.

Although Mulago hospital spokesperson, Enock Kusasira denied the alleged deaths, he admitted that the hospital suffered a one-hour gap without oxygen before it was delivered from Mulago’s plant to Kawempe.

Now, the Permanent Secretary in the Ministry of Health, Dr Diana Atwine has come out to give her account of events, claiming the deaths of the babies were far from preventable.

She says that a due (expectant) mother identified as Magdalane Nalunkuma, 59, was referred by Women’s hospital in Bukoto to Kawempe hospital following an embryonic transplant of quadraplets in January.

“The lady presented with all complications of advanced maternal age. Nonetheless, our doctors took good care of her until the hour of delivery last week on Wednesday,” Dr Atwine said.

According to her account, a pre-delivery scan was done by the doctors which confirmed that one of the four babies had died in the womb.

She says that in a bid to save the mother and the three remaining babies, the doctors then decided that a ceasarian section be done quickly, which was successfully conducted by seven specialists.

“Upon delivery, the paeditricians discovered that the babies were not breathing and were blue in complexion,” she explains, adding that “they [babies] were immediately put on oxygen and other useful equipment in the special care unit”.

She however says that the babies were born prematurely as they all were underweight which could have caused their early demise.

“It should be noted the three babies were very small measuring 1.3kgs, 1.14kgs and 1.13kgs. Unfortunately, two babies passed on while the third one survived and is still under critical care in the special care unit of the private wing”.

Dr Atwine downplayed the news reports that cited the lack of oxygen as cause of death for the two babies yet the other baby survived and is still on the same oxygen in the same critical care unit. 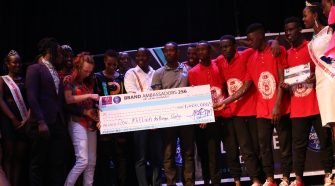