With barely a month after unveiling beauty queen, Quiin Abenakyo, as miss Uganda’s tourism ambassador and that she was to champion the Eastern and North East leg trip while marketing Uganda, dubbed ‘Tulambule with Quiin Abenakyo’, the 22 year old has been dropped and replaced with miss tourism, Margaret Kankwanzi.

Margaret Kankwanzi, was Tuesday flagged off at the Independence Monument in Kampala alongside, Socialite Anita Fabiola and Emily Ayen Miss Karamoja by Tourism minister, Godfrey Kiwanda.

On Sunday last week, Abenakyo didn’t turn up to start off the trip citing toothache problems, but unconfirmed reports in indicate that she was fine and sound, and thus deliberately snubbed the campaign due to other reasons.

It is reported that Abenakyo expected to be paid by the tourism ministry, which has allegedly not been met.

Our efforts to reach Minister Kiwanda for a comment on the matter were futile since his known telephone contact was out of reach.

Meanwhile, the flagged off team will be covering Jinja, Mbale and some parts of Karamoja-Kidepo, before coming back through Acholi region that is Murchison Falls national park promote Ugada’s tourism potential. 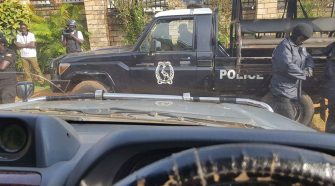 Police Besiege Homes of Besigye, Other Opposition Politicians Ahead of Bobi Wine Trial