Members of Parliament were Wednesday shocked to learn that the Judiciary Permanent Secretary, Expedito Kivumbi Kagole faked sickness so as to dodge committee sitting on Tuesday.

The Judiciary boss was meant to appear before the committee to respond to queries that were raised in the Auditor General’s report of 2017 in which he is accused of mischarging a total of Shs 34bn.

Through his lawyer, Obedi Mwebesa the Kagole informed the committee that his client couldn’t attend because he had gone for a medical check-up relating to an eye problem.

On appearing before the committee on Wednesday, the legislators put Kagole to task to produce evidence that he had been to the hospital.

“We need confirmation that indeed the gentleman had a medical emergency. Ugandans are at pain and we know how the Judiciary has put intense suffering on people. So when we have such a pain and we see such technical people dilly-darling, then you know there is big rot in the institution,” demanded Butemba County MP, Innocent Pentagon Kamusiime.

The committee Chairperson, Nathan Nandala Mafabi ordered Kagole to produce a medical report to confirm that indeed he had visited the hospital the previous day.

However, Kagole told members that he had left the report at home, an excuse the legislators could not take. They further insisted that he be escorted by the CID attached to the committee, to go back home and bring the report.

Surprisingly, when the Kagole returned, he was in possession of a report from Bugolobi Medical Centre were he had had picked it.

The report was quickly scrutinized by the MPs who found out that there was some information missing.

Nandala thus set up a sub-committee headed by the committee Vice Chairperson, Okini Ojara and Pentagon as well as the Parliament Medical doctor to go to Bugolobi Medical Centre to verify the report.

The team later reported to the committee with shocking revelations that by the time they reached the hospital, Kagole’s information had just been entered into the system yet it must have been entered the previous day.

Reporting on the data entry and Pentagon noted that; “We sat as a team at the registrar and looked through the data base and our major emphasis was on yesterday’s attendance, we found out that his record data showed that he visited the hospital for medical check up on July 3rd, 2019 at 13:37hrs with 8 minutes waiting time.”

Pentagon added, “I want to bring it to the attention of members that the other clients data that we considered showed that they had visited the facility on July 2nd and their data had been entered on the same date apart from Kagole whose data was entered on July 3rd at 13: 37.”

The team leader Ojara added that they found out that despite there being a record of Kagole at the facility, there is no record that he visited the facility yesterday when he snubbed the committee.

“We found out that the visit didn’t take place yesterday as insinuated and there was a manipulation of his data and the PS must explain to us how this came about. The information that was given by the PS is not correct,” Ojara said.

After receiving the report, Nandala Mafabi suspended the committee sitting for 30 minutes to allow members have late lunch and discuss the matter.

“What I want to tell the PS Judiciary is that you still have leverage to tell the truth. For now, we should have lunch as we discuss, we don’t need to decide now,” Nandala ruled.

The committee later resumed and in defence, Kagole noted that he never lied to the committee but since he is an exceptional client at the hospital, he doesn’t go through some preliminary records.

Nadala later pardoned Kagole and the committee proceeded to handle other queries in the Auditor General’s report. 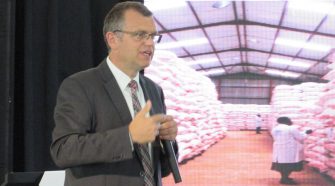