Ruhinda County MP, Rtd Capt. Donozio Kahonda, was received back in Mitooma district as a hero by his supporters on Tuesday.

The legislator had just been released from Kirinya prison on bail by Luweero chief magistrate, Charles Sserubugga.

The magistrate granted Kahonda a non cash bail of Shs.500,000 while three people who stood surety were each bonded Shs5m not cash.

Prosecution alleges that Kahonda while at Ndejje University in the year of 2006 knowingly uttered false documents to the Academic registrar purporting to have a Uganda Certificate of Education whereas not.

On arrival in Ishaka town, Kahonda was welcomed by boda boda riders, city businessmen and women who lined up and led a procession to his Kabira home in Mitooma district.

Capt. Kahonda thanked his supporters and promised to fight against those who want to sabotage his victory.

He said he was elected to represent and work for his people. 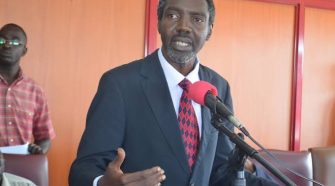