In the clip, security personnel armed with guns and sticks, initially thought to be LDUs, are seen disgracefully bashing and pushing him for sometime as he remained calm and composed.

Luzige who belongs to the ruling party, National Resistance Movement (NRM), has exclusively talked to this news website to give account of what transpired.

Contrary to the initial and social media claims that the personnel seen in the video mistreating the district chairperson belonged only to the Local Defence Unit (LDU), Luzige said some of them belonged to Uganda Peoples’ Defence Forces (UPDF) attached to Kakiri military barracks who are in the area to enforce security.

According to Luzige, all started while he was driving from the District Headquarters at around 6pm, when he tried to stop the security personnel in question from beating up a sick woman who was using a Boda Boda to go to hospital for medication. He said they were beating her with very big sticks.

“The woman pleaded for mercy as she explained that she was headed to the hospital but they didn’t listen. So I parked and asked them why they were mistreating the woman yet he clearly said she was going for medication. I told them they ought to listen to me or even ask for her medical documents to prove her claim instead of beating her,” Luzige told SoftPower News.

He said that he as well reminded them that the President ordered security teams enforcing government directives on COVID-19 to only arrest and hand over people who violate the directives to police but not to beat them up. This, he says, they didn’t also listen because they appeared drunk.

“When I came closer to them, I realized that they were all drunk, they couldn’t listen to me. Instead, they started manhandling and pushing me but since I knew they were drunk, I remained calm despite being armed as well,” explains Luzige.

He said the scuffle continued for some time as other personnel joined in pushing him to police where their commander identified as Lt Kakonge blamed the culprits for mistreating the District Chairperson.

He however says he has since been contacted by the Chief of Defence Forces, Gen David Muhoozi, the Defence Spokesperson, Brig Gen Richard Karemire and officials from State House and they have all promised to take action.

“I am waiting to see the action the army has promised to take today but if nothing is done, I will go ahead as a lawyer to sue these individual personnel,” says Luzige.

He adds that for some time, he has been receiving complaints from the people of Mityana that they are always beaten by the personnel but whenever he reported the matter to their commander, the personnel would deny any wrongdoing.

He says: “I am happy that I saw this myself and they went on to met their atrocities on me, they now can’t deny and so, we are going to handle and fix it.” 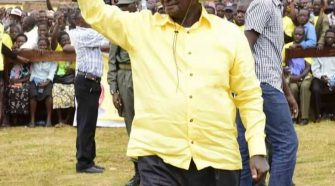