Eyewitnesses say that Luzige was roughed up by four LDUs on Tuesday after he confronted them for beating up a woman who was riding on a motorcycle beyond curfew time.

However, speaking to SoftPower News on Wednesday morning, Luzige said he was manhandled by both LDU personnel and soldiers.

“I was assaulted by LDUs and soldiers,” Luzige said, adding that the Chief of Defence Forces (CDF) has called him.

This news website has also independently confirmed that two soldiers were present.

Motorcycles are not allowed to carry passengers, and their operations are restricted to day delivery up to 5 p.m, according to guidelines issued by President Yoweri Museveni as part of the measures to curb the spread of COVID-19. But a number of them have continued to disregard the guidelines, they carry passengers and move beyond the stipulated time.

Reports indicate that a woman sustained injuries while trying to jump off a motorcycle in Mityana after she and the rider bumped into an operation by Local Defence Unit personnel on Tuesday. Efforts by the district chairman to intervene ended in an ugly scene in which he was assaulted by LDU personnel identified as Francis Nyarwayo, and later detained at Mityana Central Police Station.

Luzige was released after the intervention of Mityana Resident District Commissioner (RDC), Isha Ntumwa, who also ordered the arrest of all personnel involved in the operation. Ntumwa condemned the LDUs for using excessive force, saying that such acts will not be tolerated.

Contacted on Wednesday at 7am, the Defence Spokesperson, Brig Gen Karemire condemned the act.

“We (UPDF) strongly condemn such act against our civilian leader. The perpetrators will be arrested and prosecuted. No doubt about that,” Brig Gen Karemire told SoftPower News.

UPDF is expected to issue a detailed statement this morning. 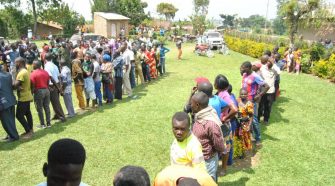