Police are investigating two of their officers who were allegedly involved in the shooting and killing of a man in Mityana following the protests that broke out in Mityana on Sunday.

Protesters took to the streets blocking roads and burning car tyres and furniture, prompted by false reports that Mityana municipality legislator, Francis Zaake who is hospitalized had died.

According to a statement by the Inspector General of Police Martins Okoth Ochola, at least 23 people were arrested in connection with the same protests.

He said that the rioters engaged in criminal and unlawful acts including destroying merchandise belonging to innocent traders, interfering with traffic flow and occasioning harm on citizens.

In the efforts by Police to restore calm and normal traffic flow, one person identified as Samuel Ssekiziyivu was shot and killed by a police officer.

The deceased, a resident of Myanzi in Kassanda district had been travelling in a taxi which was shot at through the rear door. Some other five people were severely injured.

Those who were injured are Jjingo Lawrence, Jalia Nakilyowa, Ssengoba Derick, Muwonge Reagan and Assimwe David who were immediately rushed to Mityana hospital and later transfered to Mulago hospital.

Now, the IGP has said that two Police officers are being investigated for discharging their guns at the scene. They have been identified as No 54214 Morris Chemutai (at the rank of Police Constable) and No 36334 Kefa Moshi (Corporal).

“They are being investigated on the offence of murder and attempted murder. They will be produced in court to answer to these charges once investigations are complete,” the IGP said in a statement read to the press by Police spokesperson, SSP Emilian Kayima at the Naguru Police headquarters on Monday.

He said that the killing of Mr Ssekiziyivu and the injuring of the other five is regrettable and unacceptable.

“The police commeserates with the family of the late Ssekiziyivu. We promise to investigate this matter to its logical conclusion,” IGP Ochola said.

Regarding the suspects who are detained for taking part in the protests, Ochola says they will face charges of inciting violence, malicious damage to property, threatening violence and unlawful assembly.

The IGP cautioned the police desist from acts of violent confrontations and acts that violate the law.

“It’s high time we all learnt to resolve conflicts, if any, amicably and peacefully,” he said. 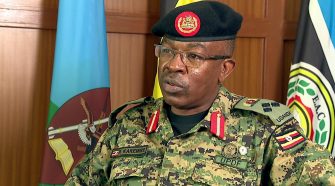