Five people have died in a nasty accident which occurred in Namayonjo village, Wabinyonyi sub-county in Nakasongola district along the Gulu – Kampala highway.

According to police Savannah region Spokesperson, ASP Paul Kangave, the accident occurred on Tuesday night at about 11pm, killing 5 people on spot and leaving 3 others with severe injuries.

“The accident happened last night at around 11pm and it involved two cars and one motorcycle. Two brothers Buyinza Ivan and Bakobe Bernard who are also residents in the area, traveling on the motorcycle are among the people died on spot. The other three who died are not yet identified,” ASP Kagave told SoftPower News.

He added that those who sustained injuries were rushed to Nakasongola army hospital for medication.

Kangave attributed the tragedy to speeding on the part of one of the vehicle drivers.

The accident involved two cars, a brand new Toyota Hiace Reg No UBD 061D, one of those being given out in the Pepsi ‘Twangula’ promotion by Pepsi UBD 061D. This knocked a boda boda which in turn lost control and rammed into the truck, Reg No UAX 182F.

According to ASP Kangave, the bodies of the deceased were taken to Nakasongola Health Centre IV mortuary and efforts are underway to identify the names of the unidentified bodies.

One Dead, 8 Injured in Motor Accident Involving 10 Vehicles in Kiwatule 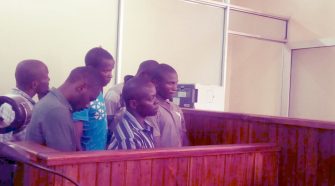