On September 28, the Kampala City Council Authority (KCCA) prosecution team charged Abiriga with being a public nuisance, after he publicly admitted to easing himself on the fence of the Ministry of Finance headquarters along Nile Avenue in Kampala.

A day later, photos had circulated on social media platforms showing the legislator’s yellow Volkswagen Bettle parked by the roadside next to the perimeter wall while he stood in a posture akin to someone urinating.

The NRM legislator who is prominent for dressing in yellow, the NRM party color appeared before Grade One magistrate, Beatrice Kainza at City Hall Court in Kampala and pleaded guilty to the offence.

However, his lawyer, Usama Ssebuwufu argued that MP Abiriga was forced to ease himself in open due to health related conditions.

Ssebuwufu presented medical documents showing his client is diabetic. He also argued that Abiriga’s age is delicate for such a long jail term

‘Own the Wall’, a Competition for Visual Artists Launched with Shs 2M Prize

Rapper Jidenna Will Collaborate with Ugandan Painter, Kwizera, Thanks to a Beautiful Portrait 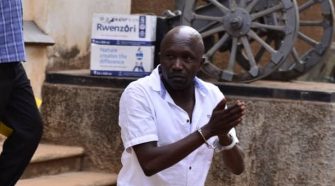