According to Kampala Metropolitan Police spokesperson, SP Patrick Onyango, the legislator had organised a rally near Kireka Market in Kira Municipality, which police could not allow to go on as planned since it was near a market.

“Police interacted with him and advised Hon. Ssemujju not to go ahead with the rally since it’s near the market. He refused to listen to the officers vowing that his meeting will have go ahead,” SP Onyango said in a statement.

As such, he was arrested and taken to Jinja Road Police Station where he is currently detained.

Onyango says the member of Parliament is held on charges of doing acts likely to spread infectious diseases which is corona virus.

“We appeal to Politicians to obey the guidelines of ministry of Health at this point of not holding public rallies,” Onyango adds.

Last week on Friday, Scuffle ensued at Kasokoso village in Wakiso district between Police and and the same legislator over his planned consultative meeting in the area on FDC’s special interest group elections.

Ssemujju said he had organised the meeting toengage the party leaders in the area on the process of getting structures in preparation for the internal primaries ahead of the country’s general elections. 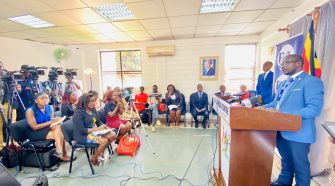