He is expected back to court tomorrow, Tuesday.

The legislator was Friday morning been arrested by Police from Lwemiyaga Town council for inciting the public to forcefully move cattle in a quarantine area.

He would later be whisked to Masaka Central Police Station where he was detained until today when he was presented to court.

Police had initially preferred the charge of attempted murder against him, an offence reportedly committed during the ruling NRM party primaries in 2010.

Ssekikubo reportedly shot Habibu Nsamba Kanyarutokye, a security operative, in the private parts during the hotly contested party primaries where Ssekikubo was contesting with Patrick Nkalubo in 2010.

But on Monday, one his lawyers, Medard Lubega Ssegona told this news website that only charges of threatening violence have today been preferred against his client. He however describes them as “ridiculous” wondering why it has taken police 10 years to charge him.

“He is charged with ridiculous charges indeed”.

“The charges are political, they are not criminal in nature and that is why it has taken them 10 years. They are political but it is unfortunate that organs and agencies of government can sit down to conspire against the nation,” he added.

Ssegona who is also the Busiro East County MP says the attempted murder charge has not been preferred against him despite being on the charge sheet. He said the charge is against another person.

It should be remembered that during the NRM primaries in August 2010 in Ssembabule district, Lwemiyaga MP Theodore Ssekikubo and his supporters violently clashed with the polling officials and police.

One person, Habib Nsamba, was rushed to Masaka Hospital after being shot while trying to disarm Ssekikubo guard. Later, Ssekikubo and his supporters reportedly went into hiding.

At first, the guard had been forced to return his AK-47 gun to Ssekikubo’s car, but it was later discovered that he had a pistol.

The scuffle began in the morning when the area returning officer, Emmanuel Sekimpi, declared that he was ready to begin the election exercise, a decision Ssekikubo challenged on grounds that it was not right for the district party elections to go on when Lwemiyaga sub-county, where he comes from, had not elected its leaders.

As Sekimpi started reading the names of the voters, Ssekikubo stopped him. A group of people then surged forward to attack Ssekikubo. And at this stage, his armed guard ordered them to keep away, but they ignored him. Nsamba then confronted Alex to remove the pistol from him and Alex shot him in the stomach.

A furious Ssekikubo, who also was armed with a pistol, threw the election materials from the table as the officials fled for dear life. He also manhandled the Police officers as well as allegedly kicking some of the polling materials. 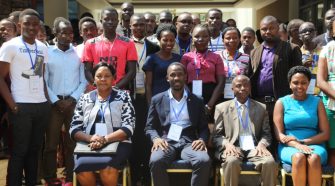 MUST: Students Advised to Be Original While Innovating Tech Solutions