The Speaker of Parliament Rebecca Kadaga has cautioned Mityana Municipality MP, Francis Zaake over poor conduct and committed him to the disciplinary Committee.

It follows the legislator’s conduct during a committee hearing where Zaake nearly beat up Makerere University Vice Chancellor, Barnabas Nawangwe.

The Speaker said that for the last two days, Zaake has exhibited unbecoming behavior before the Committee of Education.

After the committee sitting, Zaake approached Nawangwe and nearly manhandled him before he was restrained by fellow legislators.

“Over the last two days, there are some members of this House who have brought this House into disrepute in the Committees. We know that we are expected to carry out investigations but in doing so, we must observe rules of natural justice,” Kadaga said during her communication to the House.

Kadaga added, “On Tuesday when the Minister of Education appeared in the Education Committee, one of our members, Zaake conducted himself in a very disputable manner and this was repeated yesterday when the delegation from Makerere University came in,” Kadaga said.

Kadaga said that the behavior of members should at all times enhance the dignity of Parliament and its members in general.

This calls for conduct which is not derogatory to the dignity of the House, she said.

“I am very disappointed that yesterday there was high bleach of Rules 83 and 84 and I hope members will desist from that conduct,” she said.

“Members shall always conduct themselves in a manner that wins public trust and confidence in the integrity of Parliament and never undertake any action which will bring the house and its members into disrepute, ” Kadaga said.

“I have been informed at one point, Hon. Basalirwa tried to intervene so that he can make him behave in a proper manner but this wasn’t heeded to,” Kadaga said.

She noted that unfortunately, it didn’t end in the Committee, “I have viewed footage of the departure of Nawangwe from the committee room but Hon. Zaake followed him, heckling him, insulting him and threatening to beat him right up to the steps of this House”.

The Speaker thus referred the matter to the Rules, Privileges and Discipline committee of the House for further investigation.

The committee is expected to make appropriate recommendations to Parliament within two weeks. 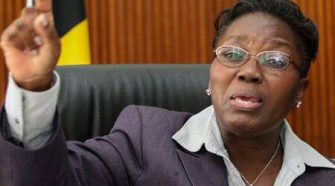 Kadaga Writes to Museveni: Who Attacked Parliament And Why?