Members of Parliament led by Ntungamo Municipality Member of Parliament (MP), Gerald Karuhanga and Kabweri Constituency MP, Francis Gonahasa have called upon the Auditor General to institute an audit into the delayed disposal of 2016 election petitions.

The MPs want the Auditor General to investigate how many election cases were filed across the country, those disposed of at High Court level, those that were appealed against and those disposed of within the allocated period of time as well as investigating how much money has been spent in handling the petitions.

Karuhanga noted that the judiciary has frustrated the rule of law in the country by failing to uphold the Parliamentary Elections Act Section 66 (2) which is to the effect that an election petition appeal shall be heard and disposed of within 6 months from the date of filing the appeal.

Karuhanga said that the law provides that the election petitions are a special category of cases which must be disposed of expeditiously because they relate to a term of office which is five years.

“It makes little sense for the Court of Appeal to delay election petition cases very well knowing that they are acting in contravention of the law,” Karuhanga said.

The legislators have noted that a number of election petitions are still pending at the Appellant Court headed by the Deputy Chief Justice, Steven Kavuma hence calling for a performance audit of the Court.

“We passed the Parliamentary Elections Act which stipulated the time of 6 months to handle the electoral petition, it is now more than 6 months and some cases haven’t been disposed; this issue isn’t an issue of inadequacy of judicial officers but an abuse of the administrative powers by Justice Kavuma as the head of the Court”.

Karuhanga observed that some justices were excluded from handling the election appeals which explains the backlog at judgment stage and some law firms had mostif not all of their cases before particular panels which goes against principles of natural justice. 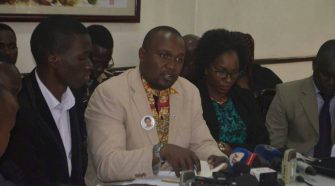