Following the closure of the Parliament Canteen on orders of the Clerk to Parliament, Jane Kibirige late last year, a section of legislators have raised concern that this may grossly affect business in the House.

The Parliament canteen under the management of Hellenar’s Restaurant has been closed after the service provider’s two-year contract expired. This resulted into the procurement of a new service provider.

In November 2017, before the expiry of the two year contract with Hellenar’s Restaurant, Parliament advertised for potential service providers to bid which saw five companies express interest.

Out of the five, only two were shortlisted.

Walter Anywar, the proprietor of Hellenar’s Restaurant also petitioned the Clerk to Parliament citing irregularities that characterized the awarding of a contract. He said the process involved bribery, bias and that the contract was awarded to an inexperienced entity.

These allegations by Anywar were however watered down by the Clerk to Parliament along with the Parliamentary Commission. A decision was later taken to have Hellenar’s Restaurant’s contracted extended up to December 31.

The decision prompted the restaurant to apply for judicial review of the bidding process (that selected Romeo’s Restaurant) and subsequently, on December 21, 2018, court issued an injunction maintaining the status-quo at Parliament until the matter was disposed of.

The ruling by court notwithstanding, the Clerk to Parliament, Jane Kibirige proceeded and locked down the premises and ordered Hellenar’s Restaurant to await the final decision taken after the court process.

Today, Tuesday, the legislator for Kumi, Silas Aogon and that of Bunyole West MP, James Waluswaka have called upon Parliamentary Commission to immediately address the stalemate since it risks paralyzing business at Parliament.

“We came from the constituency fresh and we found out that the canteen is not working. People are getting stranded including the visitors, drivers and fellow MPs, yet it is very challenging to leave work here and go outside looking for food,” Aogon said.

He appealed to the leadership of Parliament to do everything in their means to restore sanity as well as follow the law to the letter.

On his part, Waluswaka commented; “For us, we don’t eat paperwork. That is the work of the Clerk. All we need is food and canteen being operational.”

While commenting on the concerns raised by legislators, Parliament’s Head of Communications and Public Affairs Department, Chris Obore said that the situation is under control and will be soon resolved after court pronounces itself on the matter.

“As Parliament, the courts informed us that they will pronounce themselves on the matter on January 11, and we will know the way forward on Friday. The canteen had to be closed so as to follow the due process of the law, but we apologize and regret the inconveniences caused,” Obore said.

Obore as well noted that the business of Parliament isn’t related to the canteen in anyway and the decision on when Parliament should resume resides on the business committee of the House, the Speaker and the Clerk to Parliament.

“Sorry for the inconveniences caused to the members of staff, Members of Parliament and the press, since we all get our refreshments from the canteen,” Obore said. 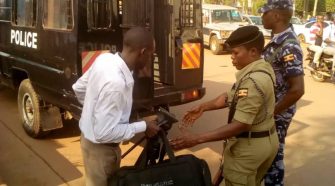