Members of Parliament on the Committee on Human Rights, have Tuesday been stuck at four different places believed to be safe houses in Kampala, when authorities denied them access.

On directives of the Speaker of Parliament, the Committee on Human Rights has for weeks been investigating allegations of torture.

Some of the individuals that interfaced with the committee alleged that they were brutally tortured while being detained in safe houses in Lwamayuba at Kalangala island and some parts of Kampala allegedly operated by the Internal Security Organization (ISO).

The legislators led by the committee’s Chairperson, also Buvuma District Woman MP, Jennifer Egunyu Nantume made an impromptu visit to places tortured victims have severally claimed are safe houses where they (victims) were tortured.

However, the legislators who left Parliament in the morning with a number of journalists were dismayed when they reached a gate of a place said to be a Safe House in Kyengera and were denied access by a man who identified himself as Kalibbala Vincent.

Vincent who did not reveal his face, told the legislators that he is in charge of the place and that they could only access inside with permission from the Director General of the Internal Security Organisation (ISO), Col Kaka Bagyenda.

Speaking to reporters in Kyengera, the Committee Chairperson, Nantume explained that the MPs had decided to do a spot visit as one of their oversight activities.

She said the act of blocking them was unfortunate.

“It is very absurd and unfortunate that at the time of reaching here at the suspected facility, we have found here a soldier in charge of this place and said we can not enter minus the permission of the Director General ISO,” said MP Nantume.

“This is very absurd because we were given this work by parliament and we are doing it for the country. If things done here are clean, then there should be no reason for stopping us from entering here,” she added.

The furious legislator who wondered why security was blocking transparency on the issue of safe houses, noted that they expected as a committee on national duty to enter and do their on spot visit.

“As a committee, we can go back and decide on what to do next. We need to design another format of reaching here,” she noted.

The committee would later order him to return to the committee the following week with the Head of Special Forces Command (SFC), Maj Gen James Birungi and Internal Security Organization (ISO) Boss, Col Kaka Bagyenda to respond to torture allegations in safe houses.

But this did not happen. The Minister said the Heads of ISO and SFC can only appear before the committee if the Attorney General advises so, since security agencies already have representatives such as Ministers who can attend to questions by Parliament relating to security.

However, while addressing journalists shortly after being denied access to a house believed to be a safe house, MPs Raphael Magyezi, Robert Kyagulanyi and Latif Ssebaggala revealed that their committee has again invited the ISO boss tomorrow, Wednesday.

“No body is above the law, if the Committees of Parliament can interact with the President on national issues, then what about someone who is heading an institution like ISO when he is the one who has many questions to answer?” asked MP Latif Ssebaggala.

“For us we have summoned him [Kaka], and we know that he must attend tomorrow so that we can even add more questions. If this is the facility where Ugandans are said to be tortured from and there is no access, then it means what is done inside there is really horrible and we can not stand as the Human Rights Committee and watch Ugandans suffer,” added Ssebaggala.

He claimed there are some individuals initially held in safe houses but who have since been released and dumped at some Police stations after a couple of years and are “almost deformed because of the torture they have been going through.”

On his part, MP Magyezi said: “The existence of safe houses is not contestable anymore, so, the question is, why don’t you allow the committee of Parliament on human rights to access them? I hope the Director General should be ready to answer this question tomorrow.”

Asked whether he was optimistic about Col Kaka’s appearance tomorrow, Magyezi said if he doesn’t, then it will be contempt of Parliament.

“The Director of ISO has been invited. If he doesn’t turn up tomorrow, surely that would be contempt of Parliament. We do not have to go through Attorney General to summon anyone. This committee has powers of the High Court”.

“People should respect Parliament, if you can not respect it yet you are a key leader of such an institution in Uganda, then whom will you respect?” asked Magyezi.

For Bobi Wine, he said denying the delegation access has exposed further the “abuse of human rights and disregard of the rule of law”..

“This is one of the places that has been reported where people have been tortured, women raped and people are being killed. Right now, we can not be allowed in there, ” he said.

He cited his aide, Eddy Mutwe, and former journalist, Joseph Kabuleta as having been abducted and released after them “making noise.”

From Kyengera, the legislators headed to another house in Nateete where they were as well denied access by security operatives and told to seek permission from Nateete Police Station which the legislators declined to do.

Instead, they proceeded to another location in Kabowa along Gabunga road and were again blocked.

Seemingly disappointed, the furious MPs travelled to another alleged safe house in Nakasero near Imperial Royal Hotel where security operatives at the gate only allowed the committee’s Chairperson access

However she insisted they were visiting the place as a team. 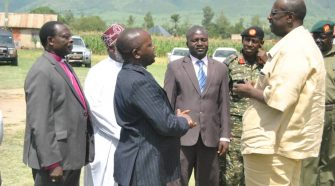